Another Great Corn Roast
A loud round of corn-fed applause to Dan Nichols for organizing this year's corn roast. Once again, the food was great, and the singing was enjoyed by all. Dan works his magic and makes everything go so smoothly that it's easy to forget how much effort goes into this event. And this year, Dan did it while recovering from an encounter with patio bricks that required stitches. Thanks again Dan. Thanks also to all those who helped with the set-up and tear-down.

It's Time For A Poll
With all the political polls that are in the news now, why not have a chorus poll? The subject matter may not be critical to national security, but take a minute and make your choice. The poll is at the top right of this issue. If you answer "other", email your answer to the bulletin. (email address is in the About Us section above)

Who Said That?
"I started writing songs at 18, and the barbershopping (experience) was behind me, but what I learned from it was a very important part of my life during those formative years. It's the most remarkable sound I think I've ever experienced."

(The answer is written at the end of today's issue.)
Sign O' The Times
Recently spotted on route 43 between Kent and Streetsboro was a yard sign that proclaimed, "DIVAS WANTED, WOMEN WHO SING" There was also a phone number, but it wasn't Ray's.

How Songs Can Influence The World

Most of us have watched enough TV or seen enough movies to be familiar with the term, "gringos". This word is used as a, not so flattering, reference to North Americans. The word was actually coined during the Mexican War. There was a very popular American song at the time that started with the words, "Green grows the lilac...". Mexicans often heard the American troopers sing this song around the campfires, hence "gringos".

The Songs That We Sing
The Swedish rock quartet, ABBA, has been in the news lately with the Broadway and movie versions of Mama Mia!. Here is a clip of ABBA's first TV appearance. (1970) Who knew that Sweden had a "wild west"?


Barbershop On XM Radio
If you have access to XM radio, check out channel 4 (usually plays music from the 40's) from 8 to 9 on Sunday nights. They do a whole hour of barbershop. They also repeat the show again at midnight for those insomniacs out there. Note: If you have DirecTV, this show is on channel 801.

Answer to Who Said That? Singer/Songwriter, Gordon Lightfoot

Watch for the next bulletin issue on Monday, October 13th.

Tomorrow ( 9/9) is the date of the 55th annual Akron Derbytown Chorus 'Stag' Corn Roast. The official starting time is 6:00 pm, but those wishing to help with the husking and other activities can come anytime after 3:00 pm. The site of the roast is the Tadmor Temple Picnic Shelter at 3000 Krebs Avenue, Akron. Wear your red chorus shirt, name badge and appropriate clothing below the waist. Come with good voice and appetite.

The nominating committee has a full slate of candidates for all chapter offices. Thanks to committee members Jim Heaton, Jerry Mason, Charlie Wilson, Vic Estafen, and Bill Halter for their efforts. Since it is not illegal to have more than one candidate for any office, if you would like to add your name to the slate, please contact Bill Halter at wahalter46@gmail.com or talk to one of the committee members at our Sept. 16th rehearsal. The chapter offices are: President, Executive VP (new office), Secretary, Treasurer, Chapter Development VP, Music and Performance VP, Program VP, PR and Marketing VP, Chorus Manager and Board Member At Large

" I'm a shower singer and I drive around listening to my barbershop learning tapes. People see me in the car and look at me like I'm nuts."

Check the end of today's post to see the answer.

Check out the slideshow at the top of this page, on the right. It shows a few pictures from our 9/2 open house. Double click on it if you want to see a full size view.

Clear Choice recently sang at two venues that were related to classic modes of transportation. On Sunday morning, August 17th, the quartet sang at the Ledges Shelter in Virginia Kendall Park for the Penn-Ohio Model A Owners Club. 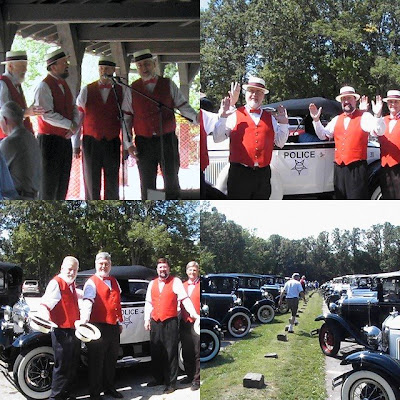 Then, on Saturday, Sunday, and Monday of Labor Day weekend, Clear Choice helped the new Lodi Station Outlet Mall with it's Grand Re-Opening. Even though four hours each day of strolling and singing was a change from most gigs, it was a great chance to promote barbershop singing to a large group of people. As you can see in the pictures below, the mall has a railroad theme complete with two trains. 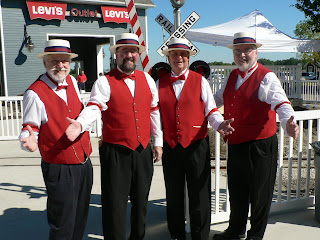 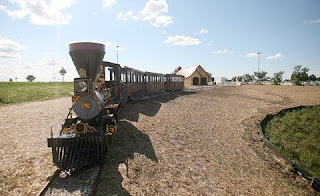 The History Of The Pitch Pipe

If you have a few minutes right now, copy and paste( or just type it) the link below into your browser window and read a very interesting article that gives some background on our friend, the pitch pipe. If you are pressed for time, that's ok. You can come back later.

Answer to "Who Said That?": Award-winning actor and song and dance man, Dick Van Dyke


Watch for the next bulletin issue on Monday, September 22.