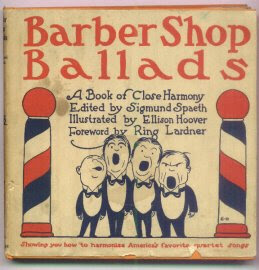 The first international chorus contest was held in Detroit at the 1953 convention. The winners, the Great Lakes Chorus of Grand Rapids, Michigan, were acclaimed the "1953 International Convention Championship Chorus." Fifteen other choruses competed, and the affair was considered a big success. It was an experiment to test the popularity of the chorus contest idea, but not all districts were represented, so it was not until 1954 in Washington, D.C., that the winning chorus, the Singing Capital Chorus of the host chapter, could be crowned the "SPEBSQSA International Chorus Champions." Some 889 men in 23 choruses wre involved in that contest, which from then on became an official part of the annual convention program.

--From Heritage of Harmony, edited by Val Hicks, published by SPEBSQSA, 1988, for the 50th anniversary of the Society


31. Be on the risers (or wherever you normally rehearse) 5 minutes early and be eager to start.

32. Offer to help any standing committee in which you are interested.

33. Videotape the chorus in rehearsal.

34. Turn in your recordings to your section leader anytime prior to the deadline.

35. Volunteer to do anything (or something!).

36. Don't wait to be asked to do a job, volunteer. How will anyone know that you're interested if you don't express your desire to get involved?

37. Bring a portable humidifier or vaporizer along to contests to help keep you and your roommates' vocal apparatuses hydrated.

38. Sing everyday! Use proper techniques of breathing and vocalizing regularly to the point that good singing is natural for you.

39. Return from breaks on time.

40. Bring a tape recorder to rehearsal - and use it.

This is certainly an exciting time of year for all those who follow the NFL, and for many who don't. The Super Bowl has grown into a many faceted event. In case you might think that football and chorus singing have no connection, take a look at the following video. The team singing has evidently grown into a tradition at this high school, both at assemblies and pep rallies. It really points out the large number of potential barbershoppers that can be found if you look in the right places. I'm not sure that their front line is as good as ours, but all they need is a little instruction.

The Power of Music


I'm sitting here at my desk watching an 83-year-old gentleman with significant memory loss singing along with "My Wild Irish Rose" on the stereo. He knows his name, and a good many old tunes—and that's about it.

Once every two weeks, I go to the local nursing home to play for the Alzheimer Group's Sing-Along Hour. When I enter the room, three of the 21 residents might actually look at me—the rest are in a misty world. But when I begin to play "Let Me Call You Sweetheart" or "Let the Rest of the World Go By," those tunes become my one and only connection with them, and most of them begin to sing.

What is it about music that makes such a deep impression? Is it the melody? The lyrics? The emotion? A combination of things?

On one occasion we did an experiment with the Alzheimer's exercise class. Everyone was asked to imitate the instructor as she raised her hands high. No one responded. She repeated the maneuver a number of times, as animated as possible speaking first in a soothing tone of voice, then in a lively voice. No response again. Then we passed around rhythm instruments. Tamborines, bells, sticks, etc., were put into the hands of the residents. Then with the accordian, I would simply play a waltz beat with the bass keys—oom pa pah—and immediately 75% would respond. Faces would begin to lighten up, and rhythm instruments would begin to shake. As I'd begin the melody, "Casey would waltz with a strawberry blonde," and the instructor would ask everyone to imitate her and raise their hands in the air and shake the instruments, again approximately 75% would respond, doing what they were asked to do.

Music is such an effective catalyst.

At the other end of the stick, I've gone into many classrooms noisy with active, challenging kids, asked everyone to come and sit down on the mat for a few songs, and had little response because no one was paying attention or could hear what I was saying. But if I begin playing a song on the guitar, and singing the instructions,to come and sit down on the mat, I have everyone's cooperation.

And some schools no longer have a music program!

I'm sure you've recognized this effect on seniors when you sing in the homes.

Can you explain it?

You saw earlier in this issue that high school football teams might be a good recruiting ground for future chorus members. But how about the zoo? Check this out.
(click on the "up" arrow on the bottom right, then click on HQ)
(This will make the graphics easier to read)

The chapter member featured in the last bulletin was Gary Young. Thanks to Gary for sharing with us and look for another chapter bio section in the first February issue. If you haven't submitted a bio form yet, you can still do so and be part of a future Getting To Know Us section.

Tomorrow (1/27) will be the third rehearsal in our new location, Holy Trinity Lutheran Church, 50 North Prospect, Akron. If you haven't checked out the new "digs" yet, here is a big

Come On Down!
Posted by Derbytown Chorus Bulletin

Happy New Year to all Derbytown Chorus members and their families. This year promises to be a great one for the Chapter with our move to a new rehearsal location and a change in the time of year of our annual show from February to April. We have a new slate of officers and hardworking committees that will be guiding us, so let's all do our part to make 2009 a year to remember.


Barbershopper Of The Year

As was announced in the last bulletin issue, Kirk Roose received the Larry Neal Memorial Award, signifying him as our Chapter's Barbershopper of the Year for 2008. The award was announced at our annual December business meeting and dinner. The picture, taken at our 12/23 meeting, shows Kirk receiving his award from the 2007 winner, Jerry Mason. 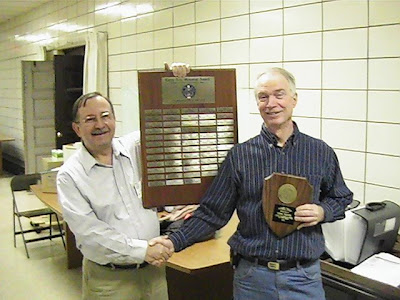 One Door Closes, Another Opens 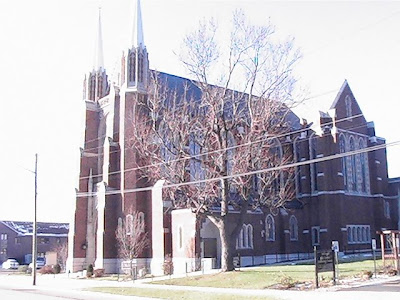 After more than 20 years of holding Chapter rehearsals in the social hall at Saint Bernard's Church, we will begin, on Tuesday, January 13, to meet at Holy Trinity Lutheran Church, 50 North Prospect Street, Akron. By the time you read this, a group of volunteers will have spent their morning on Saturday, January 10 physically moving the Chapter supplies, music, etc. to our new location. If you have not been to a rehearsal in a while, come on down to our new "digs" and check it out. Singing starts at 7:30, but 7:00 would allow more time for socializing and exploring. 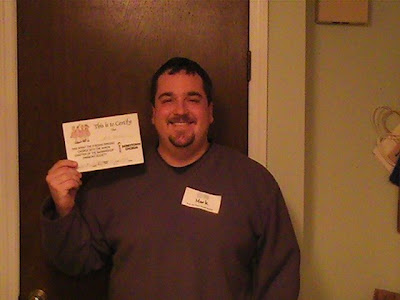 At our December 23rd meeting, we welcomed guest, Mark Becknell. Mark, from Cincinnati, was visiting at the home of Bill and Sue Halter for Christmas. Bill and son, Mike, both chapter members, encouraged Mark to join us for some singing and fellowship. Mark, who plays guitar, drums and sings in several Cincinnati area bands, reported that he enjoyed a taste of barbershop music.

21. Go to Harmony College and other regional/district/international education events whenever possible.

22. Offer to help the newsletter/bulletin editor with whatever you can do.

23. Write an article for your newsletter/bulletin.

24. Review a barbershop show or album for your newsletter/bulletin.

25. Volunteer to work with an experienced member to learn a new chapter administration skill.

27. Encourage the formation of chapter quartets.

29. Take a non-meeting night to help another baritone (lead, tenor, or bass) learn his part.

30. Don't come to rehearsal with a contagious sore throat or anything else you could spread around.

Plans are in motion to make chapter quartets available to do Singing Valentines on February 13th and 14th. This program can be a great

recruiting tool as well as helping the chapter monetarily. If you want to volunteer to be part of the 2009 Singing Valentines program or if you want more information, contact Rip Wilson or Mike Halter.

The following information was submitted to The Bulletin using one of our Chapter Bio Sheets. This information is being shared to help us learn more about the men with whom we sing. Chapter Bio sheets are available at rehearsals and, on request to derbytown08@gmail.com, can be emailed to you and printed out. Completed forms can be emailed to the previous address or turned in to Mike Halter at rehearsals while the Bulletin staff is on sabbatical in Florida. The identity of each chorus member will be revealed in the next Bulletin issue after his information appears.

This man has been a barbershopper for eight years and has been a member of the Derbytown Chorus for the same period of time. He was born in Akron but has also lived in Cincinnati. He has two children and five grandchildren.

In his job as an engineer, he worked on teams that (a) developed the radar defense around the United States during the mid 60's and (b) designed and built the first servo-driven automatic inspection machine (CMM). He also designed and built several computer-based machine controls.

Outside of barbershop, he has worked with several sound systems. He recorded his church radio program for twenty years. He also enjoys recording and editing his own barbershop learning files.

Who Were Those Four Guys?

In the 12/22 Bulletin Issue, chapter members were challenged, in a nice way, to discover the name of the quartet that provided the male back-up voices on Bing Crosby's 1942 recording of "White Christmas". If you guessed The King's Men, you were right.

On the 1942 "White Christmas" recording with Bing Crosby, some female voices were added to the group and they were called The Ken Darby Singers.

The King's Men were regular cast members on the popular radio show, Fibber McGee and Molly. They are shown, on the left, in the cast picture below. 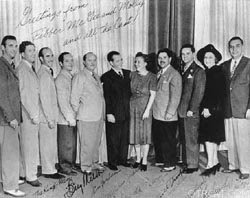 The following video gives you a chance to listen to this wonderful group of men who played a role in making our hobby what it is today.

Most of you have probably heard of the Ames Brothers. Here are some things that maybe you didn't know, backed by the singing of this great quartet.