A Visit To The Paradise Coastmen

On Thursday, January 21, your chapter bulletin editor, a snowbird resident of Bonita Springs, FL visited a rehearsal of the barbershop chorus in nearby Naples. Another resident of the RV park where my wife Sue and I are spending the winter is a member of this chorus and invited me to go with him to the rehearsal. 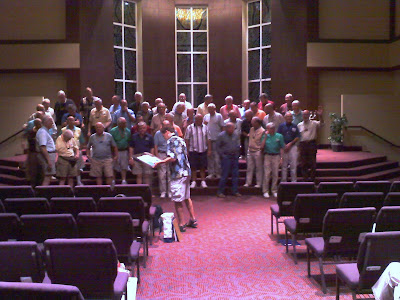 The chorus is in the process of preparing for their show, titled "Red, White and Green". It features a great selection of Irish songs by American composers. Many of you may be familiar with the chorus director, Steve Jamison. He is a long time barbershopper, as well as a well known arranger, coach and judge at all levels including International. I picked up a few warmup techniques and some other singing tips that I will share when I get back to Akron. With the show scheduled for a 7:00 pm evening performance on March 5 and a 2:00 matinee and another evening performance on March 6, the chorus is rehearsing Thursday evenings as well as Saturday afternoons.

I found that this chorus, although a bit larger than ours and , as with many groups in Florida, a bit older on the average, they were quite similar to us in song selection and the general way that rehearsals are conducted. There were three men, who happened to be absent for this rehearsal, that were mentioned for their 53 year renewal.

I have added a link to the Paradise Coastmen's website to the "Hot Links" section at the top right of the bulletin page. If you check the information about the show, you will notice that the featured quartet for this 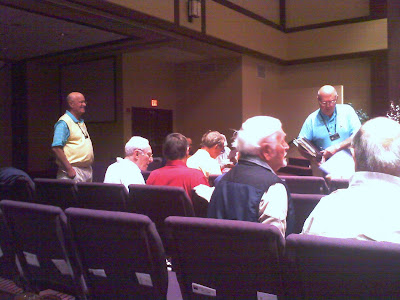 Sue and I will be attending the show, so we'll get to see at least a portion of the Akron show when "Our Town" does their segment.

Has A Place In History

Those of us who have been in the chapter for a few years remember when the guy directing craft sessions or warm-ups would sometimes say, "Sing that phrase saying 'bung, bung, bung.'" I figured that somebody, somewhere, who taught vocal techniques had recently decided that use of this syllable would expedite musical learning. Personally, I didn't think singing the word "bung" would help me to sing better, or hear the chords better, or do whatever else better that it was supposed to do. While reviewing some material I picked up at Harmony College last summer, however, I ran across the following story from the life of our founding father, O. C. Cash.

Cash, who was born in 1892, was raised in a part of Oklahoma described as a rather wild area. His father was a leading citizen in the community and was president of the school board. One day two hoboes who had been kicked off a train by a railroad detective wandered into the general store and overheard Mr. Cash remark that the community needed a schoolmaster.

Mr. Cash, who was understandably skeptical, asked him if the world was flat or round. The hobo replied, "I can teach it either way."

Wiley became the local school master and also organized a night school in which he taught mathematics one evening and music another. Young O.C. Cash attended the music classes and later recalled that Wiley taught his pupils to harmonize familiar chords on the syllable "bung." Wiley called this the bung-bung system, and it made a permanent impression on Cash.

One day some law enforcement officers appeared at the school and told all of the children to go home. Mr. Wiley, they explained, had to go away for a while. He never returned.

Forty years later, after Cash had become a lawyer, he decided to try to find out what had happened to this man. He discovered the Jim Wiley had died in an Illinois penitentiary, after being convicted of forgery. Cash always believed that he was framed.

Despite my original impression, singing "bung, bung, bung" has a place in barbershop history. I guess that it wasn't as dumb as I thought.

(Doesn't everyone get the day off when the President has a birthday?)

This is a class for under 25 year olds from last Fall's Harmony University. What a great example of how we can keep barbershop alive and well in the future.

We haven't featured tags recently in the Bulletin, so let's catch up.


This tag has been heard in various forms at our rehearsals. Check out this version.

There has been a flood of requests lately for more songs by Eddie Condon And His Footwarmers, so here you are. Enjoy.

If you are reading this, you have successfully arrived in the new decade.

This is an achievement that should be a source of pride. But, despite the Cunard Line's slogan that "Getting there is half the fun.", 2010 will bring many more new barbershop experiences for all of us. There will be new song

s, new singers, a new show and all the fun that is connected to those things. So here's to a great upcoming year for you and yours.

A few issues ago, it was mentioned that Robin Reid treated members of the Board to Melrose apples at one of our monthly Board meetings. The Melrose name is used to identify our Division of the Johnny Appleseed District. A follow-up was promised and so, here it is.

The breeding of the Melrose apple was begun at the Ohio Agricultural Experiment Station in Wooster, OH, in 1931. It was selected in 1937 and introduced to the public in 1944. It is the official apple variety of Ohio and ripens here in mid to late October.

The Melrose is a cross of a Jonathan, which accounts for the white flesh and rich flavor, and the Red Delicious, which provides the shape and sweetness.

This apple is one of the best "keepers" of all time. At normal storage temperatures of 30-32 deg., they can be stored for five months and actually seem to develop a better taste with time.

So, the next time you attend a Melrose event or sing with the Melrose Chorus, you'll know a little more about the apple that provided us with the name. Maybe we could start a tradition of having some of these apples present at special chorus events during the year.

Keeping Up With Chorus Activities

We are fortunate in the Derbytown Chorus to have a constant series of ongoing events and performances. The Chorus, Matinee Singers and Chapter quartets are always working to KTWWS. We are also fortunate to have available documents, both print and online, that help us keep track of all these activities.

High Notes- Robin Reid provides us with a weekly reminder as well as documentation of rehearsal activities. High Notes is available in print form at rehearsals and online in the "members" section of the Chapter Website.

Chapter Email Newsletter- Jim Bishop makes information about Chapter activities and also news from the world of barbershop available to all those on our email list.

Derbytown Chorus Bulletin- This publication was started to bring in some of the more unusual or lesser known information related to barbershop as well as to singing in general. Important events and activities of the chorus will be included also, but the focus will be on discussion of topics that might not appear in the Newsletter or High Notes.

Be sure to check all three of these publications for up-to-date notices and if you have information to present to the membership, you have a triple threat at your disposal.

Singing For Life-Past and Future