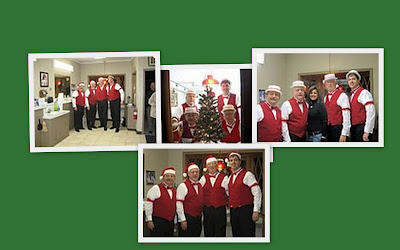 Eating 12 Grapes :
In Spain people eat 12 grapes as the clock strikes midnight (one each time the clock chimes) on New Year's Eve. This peculiar ritual originated in the twentieth century when freak weather conditions resulted in an unseasonable bumper harvest of grapes. Not able to decide what to do about so many grapes at Christmas time, the King of Spain and the grape growers came up with the idea of the New Year ritual. Now, if only this happened all around the world...

The Derbytown Chorus will again be part of the First Night Celebration in Akron. This is the 14th year for First Night, and our Chorus has been there every year.

Bulletin On The Move

This issue of the Bulletin is being sent to you from a section of cyberspace that is in the vicinity of Harmony, NC. Editor Bill, his wife Sue, and Wickett the Wonderdog are on their way to Florida for the winter. The six Bulletin issues for January, February and March will originate in Bonita Springs, FL. Thanks to technology, this isn't as much of a change as it might seem to be.

I do request that any story ideas, chorus information and especially pictures that you think might be good to include in the Bulletin be emailed to
derbytown08@gmail.com

Gifts in Shoes :
In Greece children leave their shoes by the fireside on New Year's Day (also the Festival of Saint Basil in Greece) with the hope that Saint Basil, who was famous for his kindness, will come and fill their shoes with gifts.

Times Square Celebrations :
The first Ball Lowering celebration atop One Times Square was held on December 31, 1907 and is now a worldwide symbol of the turn of the New Year, seen via satellite by more than one billion people each year. The original New Year's Eve Ball weighed 700 pounds and was 5 feet in diameter. It was made of iron and wood and was decorated with 100 25-watt light bulbs

The 2010 Show Is Getting Closer All The Time

There's music of the holidays
Playing on the radio -
There's Christmas decorations
Almost everywhere you go.

The Salvation Army bells
Ring out for the poor -
The "Ho,ho." of Santa Claus
In the department stores.

Carolers sing Christmas songs -
Going, house to house -
Tales about, where no one stirs
Not even, a mouse.

Hoofbeats in fresh fallen snow
Pulling, an open sleigh -
Children asking Mom and Dad
"Is Santa on his way?"

Cracklin' from the fireplace -
Roasting chestnuts 'neath the coals -
The soft murmur of prayers
Said, for the lost souls.

Friends and family gather
To toast, Christmas cheer -
There's sounds of angels singing
(If, you really want to hear.

The sounds of Christmas, fill the air
As we celebrate His birth -
Wishing joy, to all mankind
And peace to all on earth.

Salvation Army Kettle
Summit Mall
11/28
On Saturday, November 28, the chorus and chapter quartets visited Summit Mall to sing our Christmas program and help The Salvation Army with their annual Red Kettle Program. We arrived early to warm up and then moved to one of the atrium areas where we could use the steps as risers and also have a chance to attract more people. We sang from 1:00 until 3:00 to a very appreciative crowd. As is typical at a mall, the audience included youngsters, oldsters and everyone in between. Many could be seen singing along as we performed. Historically, the Red Kettle sing-out is one of our first Holiday performances, and it certainly got our minds looking forward to a musical and busy month of December.

"White Christmas" (1954), starring Bing Crosby and Danny Kaye, was the first movie to be made in Vista Vision, a deep-focus process.
Copley Place Performance

Next, the chorus traveled to Copley Place for a 2:00 pm show on Saturday, December 5. As always, the beautiful building and decorations, combined with an enthus

iastic audience brought out the best in our singing. By now our Christmas show was becoming a well-oiled machine, with very few squeaks. Copley Place has been very helpful to the chorus, especially for providing transportation for some of our members to our Cleveland TV performances the last two years.

According to historical accounts, the first Christmas in the Philippines was celebrated 200 years before Ferdinand Magellan discovered the country for the western world, likely between the years 1280 and 1320 AD.
Ringing In The Season In Norton 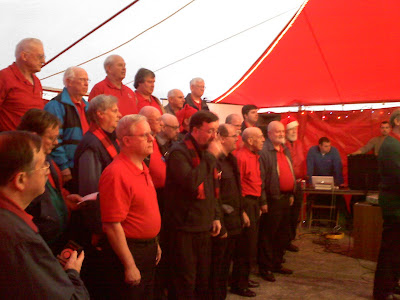 On Sunday, December 6, we gathered in Norton to be part of the musical portion of the Norton Baptist Church's "Ring In The Season Festival". Our own Terry Arman is a member of this church and he acted as our MC during the 30 minute show. It was great to add some barbershop to the contributions of other performers who sang or played instruments during the afternoon. In addition to the musical part of the festival,

there was a delicious display of Holiday baked goods, provided by the congregation. More than a few Chapter members were observed sampling these treats along with hot chocolate, coffee and hot cider. For the bakers in the crowd, there were stacks of printed recipes next to each item in case anyone wanted to reproduce these goodies at home.

Alabama was the first state to recognize Christmas as an official holiday. This tradition began in 1836.
Chorus Performance On Fox8

On Monday, December 7, a hardy group of barbershoppers proved that 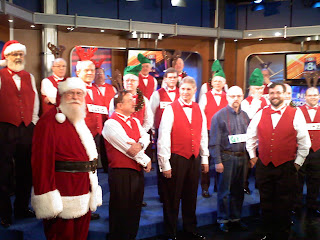 we can sing before 8:00 am. We accepted the invitation of Cleveland's Fox8 TV station to sing some Christmas songs on their morning show. This is our second visit to Fox 8, having performed last February to promote our annual show and the Singing Valentines program. Some

singers came to the studio courtesy of Copley Place transportation, others carpooled from the JoAnn Fabrics parking lot in Hudson, and some traveled on their own. Once we all got through a typical morning rush hour, the performance went very well. We were able to provide five songs as the show transitioned to and from commercial breaks. There was also a live interview with our director, Scott Giles. This provided more opportunity to promote the Chapter and barbershop harmony. Plans are in the works to make another appearance in February. We actually got a request for a chorus 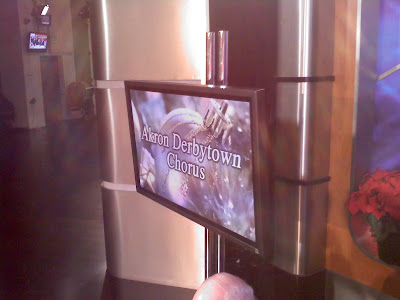 performance within 24 hours of the show. That kind of advertising is hard to beat, and it's basically free. 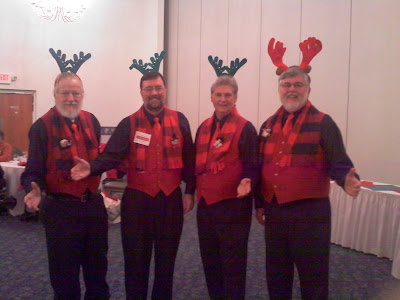 Clear Choice
Dan, Ray, Jim and Bill have been busy little reindeer this year. There is certainly a demand for live singing groups at this time of year and that can lead to a hectic, but fun schedule. This is what Clear Choice has been up to lately.

November 8- Three pre-recorded video song segments by the quartet were aired as part of the Humane Society of Summit County Telethon on Warner Cable Channel 23. Also included was a live interview with Ray Stone.

November 16- Sang at Woodridge Middle School for Senior Citizen group from Peninsula. The quartet also performed for the school's vocal music class, listened to songs that the students were learning for their Christmas program and held a question and answer session about barbershop and quartet singing. One of the students was the grandaughter of Chapter member, Jim Malley.

November 27- Did a 45 minute show for the Children's Hospital Tree Festival at the John S. Knight Center.

December 1- Sang at the tree lighting at Rockynol Retirement Community.

December 5- Sang a 30 minute show for the residents of Chambrel.

December 13- From 2:00-3:00, entertained at Springhill Historic Home and Farm in Massillon, for the volunteer staff Christmas party.

December 14- Sing at 12:30 in downtown Akron at a Christmas party for Miller Examination Services.

December 17- A 30 minute show for the Lions Club at the Galaxy Restaurant in Wadsworth. 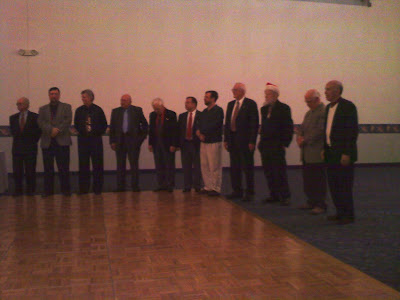 The Chapter's Annual Business Meeting and Christmas Party was held on Saturday, December 12 at St' Joseph's Family Center. In addition to a wonderful meal and plenty of socializing, there was of course singing. Prior to the singing, however, there were two very important items of business that needed to be taken care of.


First, the Chapter officers for 2010 were installed by Darryl Flinn. Congratulations to the following new officers:

Then, the Barbershopper of the Year award was presented to Jim Bishop (shown below), by last year's winner, Kirk Roose. Congratulations to Jim on a well-deserved honor.

Featured entertainment for the ev 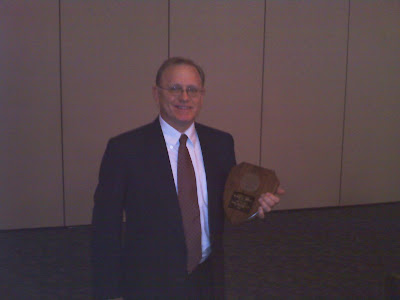 The Derbytown Chorus sang a few Holiday songs as did Chapter quartets, The Summit Chordsmen and Clear Choice

A big thank-you goes out to Jim Elliot for organizing and coordinating everything to make this event the enjoyable evening that it was.

In an effort to solicit cash to pay for a charity Christmas dinner in 1891, a large crabpot was set down on a San Francisco street, becoming the first Salvation Army collection kettle. 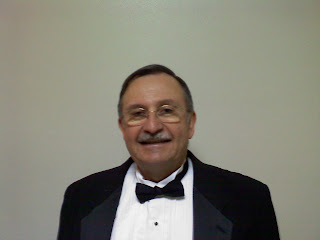 In 1907, Oklahoma became the last US state to declare Christmas a legal holiday.

Here's wishing all who read this a joyous Christmas and a happy and healthy 2010. Now, as is often said, always end with a song (or three).