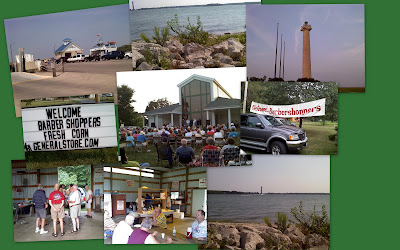 The 63rd annual Barbershop Weekend was held this year on August 13-15. More than a dozen quartets entertained crowds near the Perry Monument on Friday night and again at the Middle Bass Town Hall on Saturday night. As always, there were many opportunities to sing, greet old friends and meet new ones. The cook shack was a busy place. The grill was always ready if you wanted to fry up a tasting meal and there was a great pancake and sausage breakfast there on Saturday morning.

After the quartet entertainment on Saturday night, all barbershoppers (I estimate around 100) took the stage for the mass sing. Just being up there with that group, being directed by barbershop legends like Burt Szabo, is enough reason to make the trip each August. If you have not attended Middle Bass recently (or ever) make a note on your calendar for next year. Many of the men who have kept this tradition going have passed on or are unable to make the trip due to health issues. There was a noticeable infusion of younger singers this year and we need to continue and build on that trend. As many of us shouted after we closed Saturday's program with KTWWS, "It's Great To Be A Barbershopper". 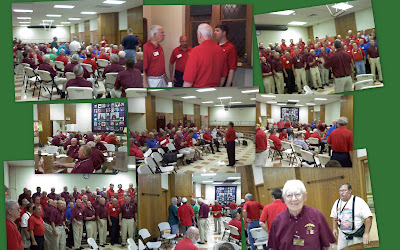 We know that every Tuesday rehearsal is an open house, but last Tuesday was a special night indeed. The Akron Derbytown Chorus hosted members from The Hall Of Fame Chorus from Canton and The Salem Jubilee Chorus. Each chorus as well as chapter quartets entertained throughout the evening. Then it was time for socializing. Once again, Cliff Crocker provided his now famous chili in addition to hot dogs. A big thanks to Cliff and also to other Akron Chapter members who supplied food items.


Here are some videos from Tuesday night.

And Now The Choruses

What O.C. Cash Forgot To Tell Us

Performance In Green (but wearing red)

At 4:00 on the afternoon of August 22, about 30 Akron Chapter members entertained the crowd at the annual Queen of Heaven Family Funfest. The chorus plus quartets, Gear Shiftin', Clear Choice, and Keyed Up provided barbershop music for

approximately 45 minutes as part of the festival's entertainment program. Director, Scott Giles, and assistant directors Dan Nichols and Terry Arman ably guided us through a variety of songs from our show and performance repertoire.

This will be the last Bulletin issue for the near future. I have been producing The Bulletin for two years (60 issues) and feel that I need a break. Also, I want to take some time to look over the many other publications that I receive online from other Bulletin and Newsletter editors to look for ways to make our publication better serve our readers.

When I started the Bulletin, one of my goals was to introduce audio and video capabilities to Chapter communications. I hope that I have succeeded in that. Keep in mind that, during The Bulletin's absence, you still have the High Notes, so well done by Robin Reid, and the email Newsletter capably authored by Jim Bishop. Remember to read these publications so that you stay up-to-date on Chapter activities.

All of the archived editions of The Bulletin will remain online, so feel free to browse through them whenever you choose. Also the links to our Chapter webpage, JAD, BHS etc. will still be active.

I want to take this opportunity to thank all those who provided encouragement and support during these past 24 months. It has been fun for me and hopefully The Bulletin will be back in the future.

Of course, you wouldn't expect me to close this issue with anything but a little humor. So here is a voice lesson that concentrates on the two very important techniques of holding a pitch and correct vowel sounds.

I usually don't start a Bulletin issue with videos, but let's mix things up a little today. After all, this is 8-9-10. That alone is a reason to do something unusual.
The BHS has provided us with the following videos on the Society YouTube site. Since many of you are busy and may not have discovered them on your own, this will make them a little more accessible.

Now, from our own JAD, the International Silver Medal Collegiate Quartet.

(Editors note: This performance is representative of each one that Storm Front did during the competition. I was amazed at the way they could entertain the audience with hilarious comedy while still showcasing their tight harmonies for the judges. Watch for the volume, pitch and tempo changes and how effortless they seem to be. We can only imagine the work that it took to make it appear that way.) 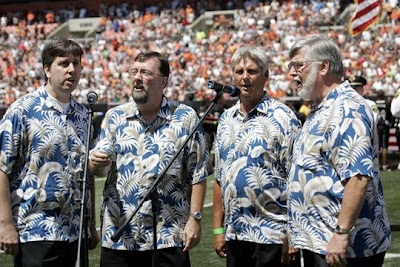 Last Saturday, August 7, the Cleveland Browns held their annual Family Day at Cleveland Brown's Stadium. It's an opportunity for families to enjoy food, games and entertainment around the outside of the stadium and later watch a team scrimmage followed by a team autograph session.
This year, Clear Choice was asked to sing The National Anthem before the start of the scrimmage. After meeting for breakfast, we traveled to the stadium for a rehearsal before the gates opened to the public at 11:00. Since our tenor, Dan Nichols, was in Kansas City at Directors Camp, Mike Halter ably provided the high notes.. Like I always say, "If you want a good tenor, available on short notice, grow your own."

Things That O. C. Cash Forgot To Tell Us 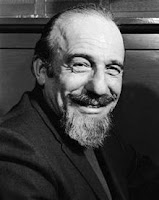 I'm sure that most of you are aware of the passing of Mitch Miller from either a TV or
newspaper report. The older members of the Chapter are more likely to recall the "Sing Along With Mitch" albums and his TV show. Since we promote a spirit of singing for fun, I can't think of a person that did more to encourage people in that respect than Mitch Miller. Although he had a long and successful music career as an instrumentalist, arranger and director, his sing along concept made him famous in this country and abroad.

On a personal level, when my brother and I would take too long to get out of bed and get ready for church on Sunday mornings, we could expect to hear Mitch Miller and the gang coming from our "hi-fi" at maximum volume. I'm sure that many of those vibrations are etched permanently in my brain and may have been partly responsible for my love of singing. I still have all the 33 1/3 records of Mitch Miller t 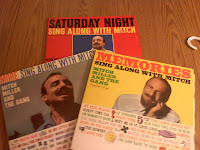 hat my Dad played on those Sunday mornings long ago. I think I may crank them up sometime soon as a tribute my Dad and Mitch Miller.

Here is a sample of what I'm talking about.

If you want to learn more about Mitch Miller, there is a link in the Hot Links section at the top right of this Bulletin page.

On Tuesday, August 17, in additional to our normal open house for men who like to sing, we are going to be visited by barbershoppers from the Canton and Salem chapters. Cliff Crocker has offered to provide his world famous chili and hot dogs. Other Derbytowners are asked to bring a food item to compliment Cliff's masterpiece.

This would also be a great time to invite a guest (or 10) of your own. See you there.

Speaking of upcoming chorus activities, you may have noticed a link to The Chapter Calendar has been added to the Hot Links of the Bulletin. You can still find the calendar on the Chorus website and of course Robin Reid and Jim Bishop do a great job of listing activities in the High Notes and email newsletter respectively. I just thought that one more avenue to use if you want to check on upcoming events couldn't hurt.