For the trade and the skill and the wealth in our land,
For the cunning and strength of the workingman's hand,
For the good that our artists and poets have taught,
For the friendship that hope and affection have brought --
Thanksgiving! Thanksgiving! 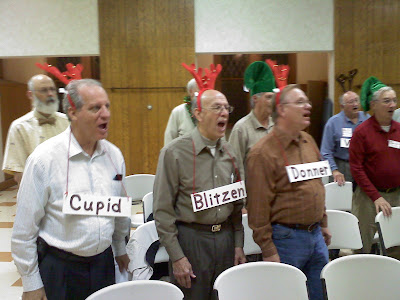 Tuesday night rehearsals have begun to take on a definite Holiday feeling. Because of all of the performances that we have scheduled from late November through mid-December, we have begun to polish up our Christmas repertoire. As you can tell from the photo on the right, even the chorus "reindeer" have made an early appearance. The scheduled sing-outs are listed below. All are encouraged to participate, and as always, there are sign-up sheets on the table at rehearsals.

At the October 27 rehearsal, two of our Chapter members showed their Halloween spirit (no pun intended) by attending in costume. Their pictures were inadvertently omitted from the last Bulletin issue, so we will now remedy that situation.
(as usual, you can click on the collages to enlarge them)
Robin Reid 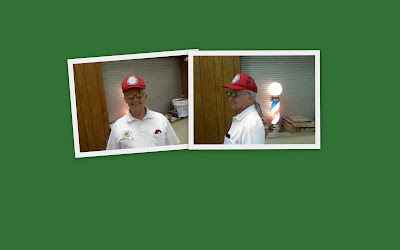 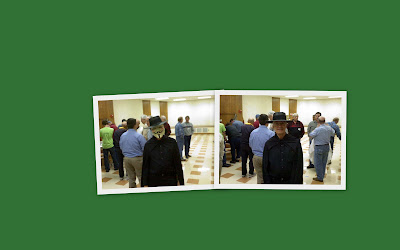 Maybe next year, we can encourage more men to wear costumes to the rehearsal before Halloween and have a judging of the best ones. Let's keep that in mind.

Speaking of Halloween.... Why do many turn-of-the-century Halloween cards show the word as Hallowe'en?

This mystery chorus member has been a barbershopper for 26 years, having been a member of the Lawton, OK chapter, the Cleveland East Suburbanaires, and for the last 12 years, the Derbytown Chorus.

He was born in Salem, OH and lived in Lisbon, OH through high school. Then came four years at The Ohio State University, two years in the U.S. Army and eight years in the world of work near Chicago, IL. He then moved back to Ohio . He is married and has two children.

Music has always been an important part of his life. His grandmother lived with his family and played the piano almost every day. His mother played the violin and both parents liked to sing. He took many piano and organ lessons as a young man and sang in the church choir. He also played trombone in his high school band and began playing regularly as a church organist during his junior year.

His main occupations have been Quality Engineer, Reliability Engineer and Software Quality Engineer. During his army service, he was a lieutenant in Army Field Artillery at Fort Sill, OK and South Korea. One engineering job with Johnson and Johnson provided his family with free disposable diapers during the year when his first daughter was born.

Hobbies outside of barbershop center on participation in church choirs and being a church organist.

This barbershopper's identity will be revealed in the 12/ 14 Bulletin issue.

Thanks to Robin Reid, the Derbytown Board was treated to delicious Melrose apples at our November 9 Board meeting. Watch for a feature

on Melrose apples coming soon to a Bulletin near you.

Resonators-Any of the parts and cavities of the vocal instrument that acoustically reinforce sound. Principal resonators are the throat and the mouth, with sympathetic vibrations in the upper chest and nasal area. (Alternate definition: The band fronted by Cleveland's own Michael Stanley)

Synchronization-Precision in singing which includes attacks and releases of words, uniformity of word sounds and rhythmic exactness.

Tone-A musical sound having a definite pitch and regularity of vibration rate. Also the interval between two notes comprised of two semi-tones. (ex., C and D are a tone apart)

Tremelo-Excessively wide or fast vibrato that leads to a loss of a distinct sense of central pitch. Usually caused by poor breath support and a faulty control of singing muscles.

Vibrato-A regular, periodic pitch oscillation above and below a tonal center. A natural phenomenon when used with a minute variation in pitch to give warmth and color to the tone quality.

If you have not been regularly using the links listed at the top upper right of the Bulletin page, you should check them out. They are:

The importance of the first two should be obvious, since they deal directly with the activities of our own Chapter. The others are designed to give you access to what is happening in the general world of barbershop. Here is a little tease showing some of the topics available now at these sites.

AHSOW-Woodshedding Defined; Education Programs; Becoming A Member Of AHSOW; Board Of Directors

Maybe your quartet has just started working on a new song. How about all the new songs that the chorus will learn for the 2010 Show? Learning a new song is a necessary part of being a barbershopper. The guide below, which was adapted from an article by Merrill Miller, Minneapolis Commodores, should make this process easier.

(1) Commitment-Nothing is memorized until and unless you decide to do it. Until you consciously try to commit it to memory, it won't happen. That's commitment.
Each of us has the same number of hours in the day to spend in some manner. Assign a priority to memorizing and put this activity ahead of something else. Give yourself a reasonable deadline.

(2) Method-here are some good ones (a) put the music down as soon and as often as possible when the song is being taught. (b) write the lyrics over and over until it can be done perfectly three times in a row. (c) record the song, then play it while driving, riding, waiting, etc.

(3) Formula-these should be helpful (a) learn the form first, e.g., intro-verse-chorus-tag; (b) pay particular attention to first words of phrases, ending words or preceding phrases; (c) learn the story line--how does it begin and end and what is the sequence of happenings; (d) identify which significant notes, words, swipes, etc., are repeated exactly in different places in the song and, conversely, what things happen differently in similar places; and finally (e) notice what other voices are doing when they are not using the same rhythm or words that you are
________________________________________________________ 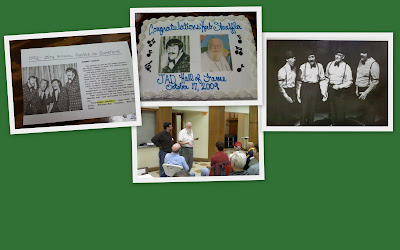 At the recent JAD Fall Contest and Convention in Lima, Herb Shreffler was recognized for his contributions to our District and to barbershop music by being inducted into the JAD Hall of Fame. Over the years, Herb has been involved in many facets of our Society and is a long-time Akron Chapter member.

At our regular rehearsal on October 27, Herb and his wife Nancy attended so that we might celebrate his induction with both of them. Herb shared some of his thoughts and experiences with us from his early days in barbershop and in our Chapter. He mentioned that the Akron Chapter will always be special to him, and those members in attendance expressed pride in his achievements.

At the conclusion of the celebration, we gathered for fellowship, some singing and delicious cake and beverages. 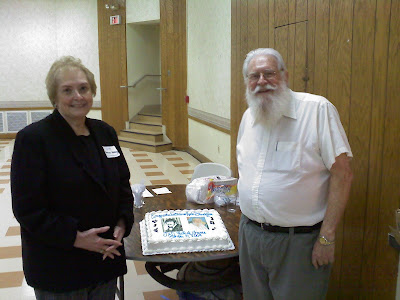 On Friday, November 13, The Kent State University Men's Chorus will host the 5th Annual KSU All-Ohio Men's Chorus Day. This event will feature over 175 high school and college men singing barbershop music together in a chorus. This group will be co-directed by Dr. Scott MacPherson and Dr. Ben Ayling. Dr. MacPherson is Director of Choral Activities at KSU, Artistic Director of the San Antonio Chamber Choir and the Isthmus Vocal Ensemble. Dr. Ayling is Assistant Professor of Music at KSU, Conductor of the KSU Men's Chorus and sang bass for the 1991 International Quartet Champions, The Ritz.

The concert begins at 7:30 P.M. in the University Auditorium ( Carol A. Cartwright Hall) on Hilltop Drive on the KSU Campus Tickets are $10.00 ($7.00 for seniors) and will be sold at the door. The Bulletin Logistics Coordinator, George Pickens-Sloan, advises all those planning to attend to allow extra time to find parking. The KSU campus has been a parking problem since the advent of the horseless carriage.

This sounds like a great evening of entertainment for those who sing and/or enjoy barbershop harmony. The concert is partially funded by The Barbershop Harmony Society. 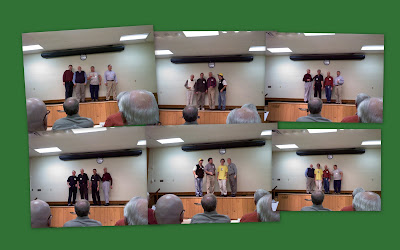 On Tuesday, November 3, in what has become a popular annual event, 11 quartets gave it their all in the 2009 Derbytown Chorus Novice Quartet Competition. The contest encourages singers to sing with new partners, sing outside their normal sections and above all have fun. This is also a great night for those who have not sung in a quartet to get their vocal chords wet. (Well, we don't sing with our feet, do we?)

As always, the singing was great, the applause was generous, the rules were chisled in mayonnaise and everyone loved it. A huge thank you to Jerry Mason for coordinating this event and to all who sang.

At the 11/10 rehearsal (TOMORROW NIGHT!!), we will be taking a chorus photo. We need this now for the 2010 Show mailer and for other PR items in the future. The new tux shirts are scheduled to be delivered to us that night. You will need to bring your tuxedo (coat, pants, shoes, socks and black bow tie). There will be a place to change into your tux and the picture will be taken in the chancel of Holy Trinity. This is your chance to make sure that your image is included in Chapter mailings for the forseeable future.

Next Wednesday, November 11, is Veterans Day. We would like to take some time at our rehearsal on 11/10 to give those of our members who are veterans a minute to share with us experiences related to that service. 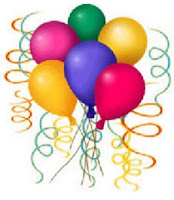 The bulletin has included several split screen videos in earlier issues. Most of those were related to tags. You may have noticed that there are now a plethora (Latin for " a boat load") of these on YouTube. Here are a trio that each take the idea a little further than just a tag. The first one is very traditional barbershop, the other two, not so much.

The last one is kind of an interesting study in vowel sounds and facial expressions, don't you think?