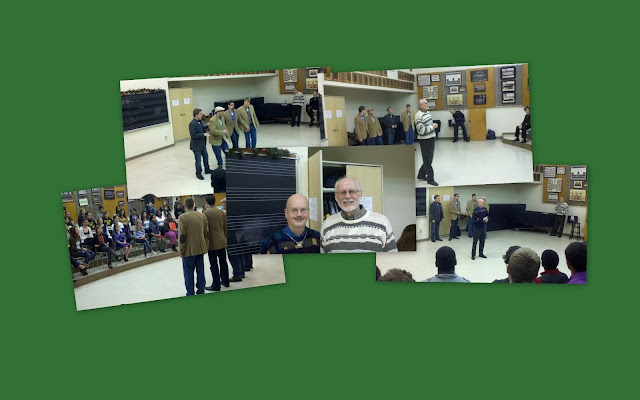 In case you didn't know, our Youth In Harmony Chairman, Mike Sitter, was very busy last month spreading the knowledge and love of barbershop to area high school students.  This issue of The Bulletin chronicles the events of Thursday, December 13.  I was privileged to attend the visit to Firestone High School and took the videos that are included here.

Con Men’s tenor David Strasser, lead Matthew Hopper, baritone Russell Watterson and bass Brent Suver met as freshman at Capital University in Bexley, Ohio. The quartet members belong to the Greater Central Ohio Chapter and sing with its award winning Alliance chorus. These four talented young men represent barbershop beautifully, and they relate so well with the high school singers. We were privileged and grateful to be able to feature them on our school visits.

The visits helped to cement relations with some of the area’s finest choral programs, and promoted the chapter’s 2013 annual show on April 5-6. Con Men treated choral and musical theatre students to first-rate singing, promoted Singing Buckeyes Harmony Camp, taught tags and mingled gracefully with the young performers. The YIH team encouraged the formation of high school quartets and offered to support them with sheet music, learning tracks and coaching. One of the chapter’s YIH goals is to spawn student quartets who can compete in district contests and perform on chapter shows. 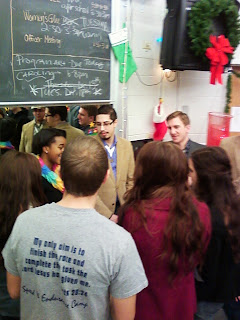 The road show began at Green High School, where choral director Alaina Starr and musical theatre teacher Scott Bantum welcomed the team. Ms. Starr was familiar with the Akron Chapter, as Keyed Up quartet had visited one of her classes a few years ago. About 45 of Green’s choral and drama students spent an hour and a half listening to, and singing for and with Con Men. A lively question and answer session followed. Then the students entertained the barbershoppers with a stirring performance of Without Love from the musical Hairspray. 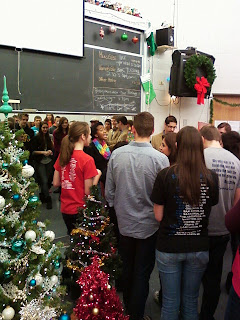 After the structured presentation, the air was thick with energy and musicality as students, teachers and guests mingled over refreshments. Some of the male students expressed interest in attending Harmony Camp and in forming a quartet. One of the leads in the school’s production of Hairspray regaled the assemblage with a soulful rendition of Mary Had a Baby.

The next stop on the tour was Firestone High School, Akron’s magnet school for the performing arts. Waiting were approximately 70 of Sally Schneider’s male choral students and half a dozen young men from Barbara Bellamy’s choral class at Kenmore High School. Your editor was also there to cover the event and to shoot photos and videos for this bulletin.

After singing a couple of songs and touting Harmony Camp, Con Men taught the young men the Impossible Dream tag. The students’ performance of the tag was so good that it prompted the presenters to ask for an encore performance. Ms. Schneider then showed her chops by carrying the lead part to the Bonnie Jean tag with Con Men. The Q & A session included several questions about the academic and musical lives of the quartet’s members. Con Men seized this opportunity to encourage the students to continue singing throughout their lives regardless what careers they pursue.

What followed was an excellent rendition by Ms. Schneider’s class of the barbershop chart of Jingle Bells and of a beautiful arrangement of White Christmas. Con Men then earned a standing ovation with Taking a Chance on Love to close the session. Ms. Schneider asked Con Men to linger a few minutes to work with her women’s choir, who were polishing a jazz chart of Santa Claus Is Coming to Town. The quartet readily obliged and, predictably, earned new fans.

Kent Roosevelt High School was the final stop of the day. Choral director Corey Fowler hosted as Con Men performed for nearly a hundred choral students in the school’s auditorium. One of the highlights occurred when Con Men called the school’s own barbershop quartet, Tetrad, on stage and taught them the In Lillie’s Eyes tag. After singing the tag once through with Con Men, Tetrad sang it without assistance and nailed it, much to the delight of their peers. 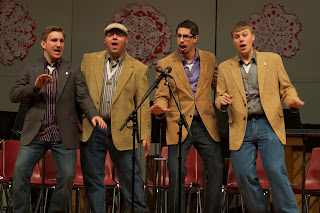 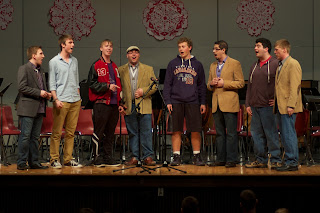 The day climaxed with a lengthy private coaching session as Con Men worked with Tetrad on Darkness on the Delta and Roll, Jordan, Roll. Tetrad plans to compete in the Johnny Appleseed District high school quartet contest in the spring. Judging by their performance and their responsiveness to coaching, they should do very well at contest. If they continue to progress, there is a good chance they will be invited to perform on our annual show in April. Wouldn’t that be a treat for our audience


Thanks, Mike, for all you do.