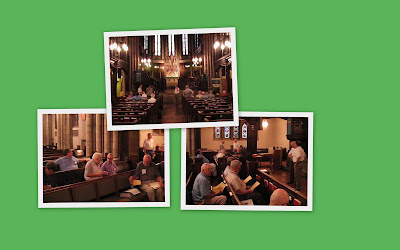 (click on picture to enlarge)
We're Movin' Up (a little bit)

Because of renovations being done to the basement social hall at Holy Trinity, we will be holding some of our rehearsals upstairs. The first of these was last Tuesday, 7/21. In addition to the beautiful architecture, we discovered that the acoustics were great too.

If We Sing It (correctly), The Harmonics Will Come 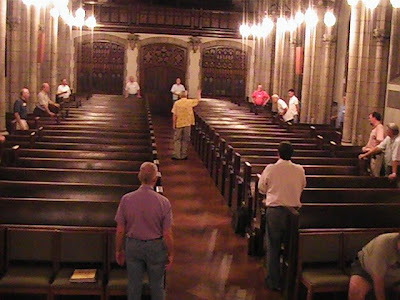 Scott, and our other directors did a fine job of having us sing in groups and locations that were quite different from our usual riser positions. What will they come up with for future rehearsals? Could be interesting.

On Friday, July 24, over 30 chorus members performed a 45 minute show for residents, staff and guests at Copley Place. You may remember that Copley Place provided bus transportation for the chorus when we sang on the morning show at Fox8.
The audience was very appreciative and many of them were seen singing along with the chorus as well as quartets, Sounds of Distinction and Clear Choice.
Thanks to all those men who helped us say thank you to Copley Place and, as always, spread a little barbershop cheer.

Did You Guess Correctly? 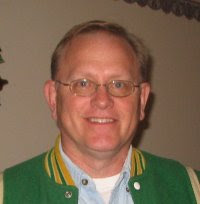 Forward Focus- The sensation of producing sound in the facial area

Open Vowel- singers term for a vowel which has a wider opening, such as "oh, "ah", or "aw"

Tempo- the rate of speed of a musical composition

You are the music, while the music lasts.
T.S. Eliot

On Saturday, July 18th, the chorus sang in downtown Wadsworth as part of the Salvation Army's Christmas in July celebration. The performance was dedicated to chorus member Roger Grecni, a Wadsworth resident, who passed away in 2008. We were honored to have Roger's wife, Kathy, attend this show. Thank you to Mike Hoover who acted as MC and to Chris Eitman and Erik Salmons for providing banners that were used as a backdrop for this occasion.

As promised in the recent special election edition of the bulletin, here are some descriptions of what the responsibilities are for our Chapter officers. More will be added in future bulletin editions between now and the Fall elections. If you want more first hand information about an office, contact the chorus member that holds that office this year.

President-is the CEO of the Chapter. He is responsible for guiding the Chapter throughout the year, participating in Chapter, District and Society activities. As head of the Chapter leadership team, he (1) chairs the Chapter Board (2) is spokesman for the Chapter (3) appoints and supervises Chapter committee chairman and officers (4) oversees the planning of the yearly calendar (5) with the Board, develops the Chapter budget

Executive Vice-President- supports the President in the performance of the duties described above and stands ready to take charge of any activity or event in the absence of the President. This position is designed to prepare a chorus member for the office of President.

Secretary- as the office manager of the Chapter, he is responsible for maintaining current and accurate records for the Chapter. He acts as the corresponding and recording secretary of the Board. The Secretary also maintains Chapter legal files and is the only officer that can order supplies from the Society. He also requests ASCAP/BMI/SOCAN clearances for the Chapter.

Treasurer- is the finance officer of the Chapter. He must keep accurate financial records, receive and distribute Chapter funds as directed, and act as the financial advisor to the Board. His duties also include assisting in the preparation of the Chapter budget, monitor and report on expenditures and file necessary Federal and State forms.
Quartet Activity

On Sunday, July 19, Clear Choice added their voices to the morning service at Lakemore United Methodist Church in Akron. The music director of the church had asked the quartet to participate and they contributed This Little Light Of Mine, He's Got The Whole World In His Hands, I Believe, and What A Wonderful World. The congregation and the church choir contributed some great singing. This was a bit of a departure from the usual quartet appearance, but it was enjoyable to be a part of the service.

Tuesday, July 28 will be our annual visit to Canal Park to sing The National Anthem before the game and "Take Me Out To The Ballgame" during the 7th innin

g stretch. Arrival time is set for 6:20 so we can warm up before the anthem. Game time is 7:05.
Uniform for the evening is: red chorus shirts, black pants, black socks and black shoes. We are sitting in the hot zone down the third base line, so bringing your "mitt" might be a good option.

Here is the chorus at the 7/21 rehearsal singing "Whole World". Notice how we're more spaced out than usual. (Insert your own joke here)

Oh, And Here's Some Other Chorus

If you missed the Birthday section, there wasn't one. There are no Chapter birthdays between now and the next bulletin issue on August 10.
Posted by Derbytown Chorus Bulletin

It is that time again. The election of officers will take place in the Fall, so: 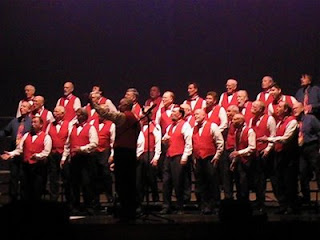 Now is the time to come to the aid of your chapter.
We all have busy schedules. Jobs, families and other commitments can certainly fill in an appointment calendar in a hurry. Just the activities related to barbershopping can sometimes make for a busy schedule.

Our chapter has been fortunate over the years. We have had hardworking, dedicated officers who made themselves available so that the Derbytown Chorus remained a vital part of our Society and also our community.

Your help is needed to assure that the success of the chorus continues. If you are currently an officer and would be willing to place your name on the ballot again, that's great. Maybe you want to try another office for the coming year. Fantastic! Your experience and expertise is an invaluable asset.

If you have held chapter offices in the past, maybe many years ago, consider coming forward as a candidate again. Those who have "been there, done that" are the best guides for our chorus.

And if you are relatively new to the chorus, we need fresh perspectives and new ideas. There is no better way to feel a part of your chorus than to become involved in it's operation.

The offices that need to be filled are:

( Watch for descriptions of the duties of these officers, starting with the next regular (7/27) edition of the bulletin.)

This year's nominating committee members are: Jim Heaton, Vic Dandrea and Bill Halter. Please contact any of these men if you have questions about the elected offices. And if you are asked to be a candidate by the committee, take the opportunity to give your time and ideas to our chapter during 2010, and say YES.
Running (for office) is good for your (chapter's) health. 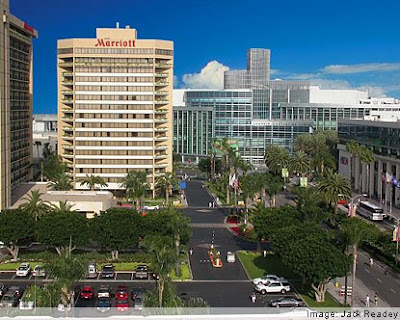 International Contest
The International Contest in Anaheim has now concluded and reports are that it was a spectacular event. Anyone who has attended a convention would not find that description surprising. If you have not been to an International, or maybe just not attended one lately, mark you calendar for next year when the contest venue will be Philadelphia. In case you have not seen or heard about this year's winners, here is a summary.

This chorus member, who was born in Bluffton, OH, has been a barbershopper and a chorus member for less than two years. He has also lived in Findlay, Medina and Hannover, Germany.

He grew up on a 250 acre farm, helping to raise pigs, as well as doing 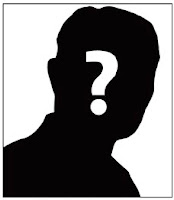 other farm chores. His high school was small in size. His graduating class had 70 students. During his senior year, the football team, on which he played halfback, had a 10-0 record and was ranked in the top ten among Ohio schools.

This chorus member's main occupation was as a computer programmer, but he also has worked as a house and barn painter (early in life), a high school math and physics teacher, and a physics instructor at a technical college.

His job with General Tire took his family to Germany for a year, where they all learned to speak and read German. This was necessary because the village in which they lived had very few English speaking residents. The family traveled through much of Europe during this time. In 2005, he spent a short time in London, working for BP. During this period, his wife was on the Tube when terrorists made a second attempt to blow up the subways. Fortunately, the bombs did not go off that time.

This barbershopper plays piano and organ and played both for his church from 6th grade through high school. He is also an astronomy buff. In college, he was president of the men's Glee Club, as well as the Wizard of Oz fan club. This latter group once rented the 16mm movie and watched the whole thing in reverse.

Dan thought of it all. The arrangements, grille, plentiful pop, yard games and lots of food. -Vic Estafen brought a double share of his pineapple//cherry goodies, Dick Hudson’s famous pasta salad and all the wives famous cookies/veggies/brownies kept us from hunger. .

Eric Salmons was there with his lovely daughter and the geese feeding boys.

If you weren’t there, you missed a great evening. (Try again next year!).

Thanks Dan! You did a great job, (as did the many others pitching-in). 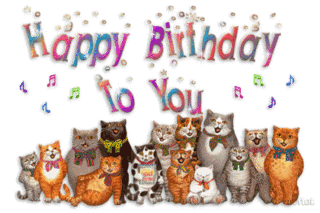 Ballad-A word used to group songs which usually have a strong emotional lyric, and may be sung either in tempo, or freely.

Expanded Sound- The effect created by the combined interaction of voices sung with accurate intonation, uniform word sounds in good quality, proper volume relationships that reinforce the more compatible harmonics producing an effect (greater than the sum of the individual voice parts).

Implosion-Compression of air between the closed glottis and the closed oral and nasal passages, forming the voiceless consonants "p", "t", and "k".

Swipe-An arranger's tool which enhances a song. A series of chords sung while sustaining one word.

Vocal Folds-Two muscular bands in the larynx cavity which vibrate and create varying pitches by adjusting tension against the upward flow of air.

Recently, at one of our rehearsal afterglows, there was a discussion about using the internet to have a quartet sing a song, even though they are all at different locations. The technology is certainly there. If the song was a Barber Polecat, the task gets even simpler. Well, a little digging uncovered the fact that this idea has occurred to others and they have begun to put this process to the test. Here are a couple of examples. The first one features singers from New Zealand, Sweden, USA and Canada who have never met. The second was done by two singers, each contributing two parts. One is from France, the other from Germany.

Tonight Show host, Conan O'Brien, spent a large part of a day last week, hanging around with barbershoppers in Anaheim. He was attired in red and white striped jacket and suitable hat to fit the occasion. There is no word yet as to if or when the footage that NBC shot will air on Conan's show, but stay alert for special notices should something definite be scheduled. In the meantime, here is an interview with Mr. O'Brien from the Society webcast. The sound and lip movement don't quite sync, but that happens to us every Tuesday so you should be used to it.

Rehearsal Location Change-The rehearsal on Tuesday, 7/14, will be held at the home of Charles (Rip) Wilson. Times are the same: Gospel group at 6:30, Chorus at 7:30.

Aeros' Game-The chorus will be singing the National Anthem (and anything else that we can get away with) at the Akron Aeros' game on Tuesday, 7/28. Contact Jim Mally if you have not signed up yet. No charge for chorus member tickets. Guest tickets are $3.00 and Jim needs the money for guest tickets turned in by 7/14.
Posted by Derbytown Chorus Bulletin