Over 30 members of the Derbytown Chorus journeyed to Lima, OH on Saturday, October 17 to attend the 2009 JAD Fall Contest and Convention. After warming up and going over a few performance details, the chorus took the stage just befor 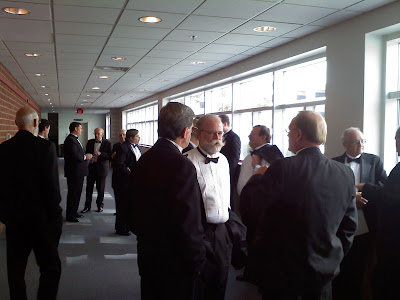 e 1:00pm. Dressed in our tuxedos with black tie, we took the downbeat from Director Scott Giles and began our contest set with "California Here I Come". I think that many of those in the audience enjoyed the thoughts of west coast warmth on a cool, windy day in Ohio.

As the applause died down, we gathered around our "baby" to sing our second number, "Kentucky Babe". Again we accepted the applause from the audience, the curtain closed and another contest performance had come and gone.

After a short visit to another room for the official chorus contest photograph, it was time to become a spectator and watch 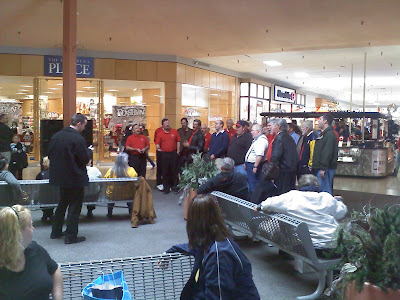 other chorus performances. Many Akron Chapter members traveled to the nearby Lima Mall at 3:30pm, to join with members of other choruses and do some singing for the mall patrons.


Most of us then made plans for the trip home. By that time we had learned that we finished in sixth place out of eight choruses in the competition. Our overall score was a little higher this year compared to 2008. Having fun and improving in the eye of the judges is a pretty good combination. You can use the JAD link at the top right of the Bulletin page to check all of the chorus and quartet scoring summaries. 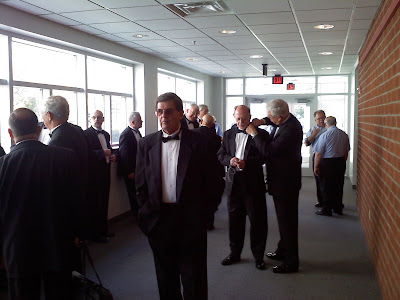 10. You get winded from knocking on the door.


9. You have to have another person chew the candy for you.


8. You ask for high fiber candy only.


7. When someone drops a candy bar in your bag, you lose your balance and fall over.


6. People say, "Great Keith Richards mask!" and you're not wearing a mask.


4. By the end of the night, you have a bag full of restraining orders.


3. You have to carefully choose a costume that won't dislodge your hairpiece.


2. You're the only Power Ranger in the neighborhood with a walker.


1. You avoid going to houses where your ex-wives live.

The newest Chapter quartet, New Clear Energy, competed at the 2009 Fall Contest and Convention in Lima and did an outstanding job. The quartet members are: Scott Giles, tenor; David Breen, bass; Eric Jolly, lead; and Jim Bishop, baritone. New Clear Energy finished 24th out of 32 quartets and finished 2nd among the novice quartets. This group has been together only a short time and represented themselves and our Chapter very well. Congratulations to Scott, David, Eric and Jim.

What kind of street does a ghost like best?
A dead end.

u may not be aware that The Derbytown Chorus Bulletin has many staff members that contribute to the final product that reaches your computer. One of those is our staff mathematician, Cal Clueless. Cal has crunched some numbers for us and made an important discovery. Taking into account our score of 62.3 at Lima and our 58.3 score from 2008, along with The Alliance's International qualifying score of 88.8, Cal says that we will qualify for the International Contest and Convention in 2016. Let's try to choose our contest set no later than 2012.
Cal Clueless, Bulletin
Math Consultant

What did the baby ghost eat for dinner?
A boo-loney sandwich.


Clear Choice Is Outstanding In Their Field 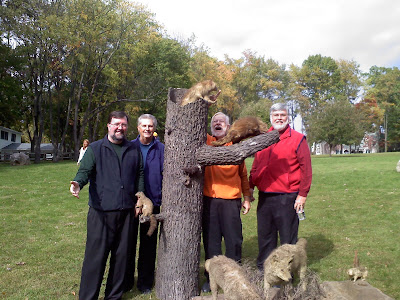 You can each make up a story to go with this picture.

On Saturday evening, October 24, at Cuyahoga Falls High School, a contingent of singers from our Chapter joined with over 200 other singers and a full orchestra to perform Lincoln: A Symphonic Tribute. This piece was written by New England composer, Dorn Younger, and was commissioned by The Summit Choral Society. In addition to our Chapter members, this event featured Masterworks Choral Summit Children's Touring Choir, The Summit Children's Choirs, guest soloists and narration by WAKR's Ray Horner.

Mr. Younger completed his thirty-minute, six-movement work this year, and Choral Society artistic director, Frank Jacobs, invited the men of our chorus to be a part of it's premier. Also included in the performance was children's choir director Hal Walker's piece, Father Abraham, for children's choir with harmonica. Our contribution to the evening included singing verses from God Bless America and America The Beautiful.

Thank you to all who represented the Derbytown Chorus. There will be a video of the event available for us. Watch for updates on where and when.


How can you tell when windows are scared?
They get shudders.

You may remember Bing Crosby's recording of this song in the late 1940's. It is from the Legend of Sleepy Hollow segment of Disney's Adventures of Ichabod and Mr. Toad. The audio here is from a Kay Starr recording that came out a few months after the release of the movie. The backup vocals and music are courtesy of the Billy Butterfield Band.

We are less than one week away from the 2009 JAD Fall Convention and Contest in Lima, OH. Final touches will be put on our contest set at rehearsal on Tuesday, October 13. If you are singing with us in Lima, it is very important for you to be there on Tuesday. Let's do our best and have some fun doing it. You can check out contest information by clicking on the JAD link at the top right of the Bulletin page.

Another reason to attend the 10/13 rehearsal is that we will be distributing our new tux shirts and accessories at that time. These shirts are a part of our contest attire. Thanks to Eric Jolly for coordinating this acquisition. We need to make Eric's job easier by having all shirts picked up on Tuesday night. We are not doing a Viking number on Saturday so bare chests will not be permitted on stage.

2010 Officers Slate Has Been Approved

The Songs We Sing
(America The Beautiful)

The Bulletin staff thanks Chapter member Larry Andrews for contributing information for the following article.

"America the Beautiful" is an American patriotic song. The words are written by Katharine Lee Bates and the music composed by church organist and choirmaster Samuel A. Ward. Bates originally wrote the words as a poem, Pikes Peak, first published in the July 4th edition of the church periodical The Congregationalist in 1895. The poem was titled America for publication. As for the music, Ward had originally written the music Materna, for the old hymn, O Mother Dear, Jerusalem, in 1882. Ward's music combined with the Bates poem was first published in 1910 and titled America the Beautiful. The song is one of the most beloved and popular of the many American patriotic songs.[1] From time to time it has been proposed as a replacement for The Star-Spangled Banner as the National Anthem.

In 1893, at the age of thirty-three Katharine Lee Bates, an English professor at Wellesley College, had taken a train trip to Colorado Springs, Colorado, to teach a short summer school session at Colorado College. Several of the sights on her trip inspired her, and they found their way into her poem, including the World's Columbian Exposition in Chicago, the "White City" with its promise of the future contained within its alabaster buildings; the wheat fields of America's heartland Kansas, through which her train was riding on July 4; and the majestic view of the Great Plains from high atop Zebulon's Pikes Peak.

On the pinnacle of that mountain, the words of the poem started to come to her, and she wrote them down upon returning to her hotel room at the original Antlers Hotel. The poem was initially published two years later in The Congregationalist, to commemorate the Fourth of July. It quickly caught the public's fancy. Amended versions were published in 1904 and 1913.

Several existing pieces of music were adapted to the poem. A hymn tune composed by Samuel A. Ward was generally considered the best music as early as 1910 and is still the popular tune today. Just as Bates had been inspired to write her poem, Ward too was inspired to compose his tune. The tune came to him while he was on a ferryboat trip from Coney Island back to his home in New York City, after a leisurely summer day in 1882, and he immediately wrote it down. He was so anxious to capture the tune in his head, he asked fellow passenger friend Harry Martin for his shirt cuff to write the tune on, thus perhaps the off the cuff analogy. He composed the tune for the old hymn "O Mother Dear, Jerusalem", retitling the work "Materna". Ward's music combined with Bates' poem were first published together in 1910 and titled, America the Beautiful.[2]

Ward died in 1903, not knowing the national stature his music would attain, as the music was only first applied to the song in 1904. Miss Bates was more fortunate, as the song's popularity was well-established by her death in 1929.

Popularity of the song increased greatly following the September 11, 2001 attacks; at some sporting events it was sung in addition to the traditional singing of the national anthem. During the first taping of the Late Show with David Letterman following the attacks, CBS newsman Dan Rather cried briefly as he quoted the fourth verse.[3]

Ray Charles is credited with the song's most well known rendition in current times (although Elvis Presley had good success with it in the 1970s). His recording is very commonly played at major sporting events, such as the Super Bowl; Charles gave a live performance of the song prior to Super Bowl XXXV, the last Super Bowl played before the September 11 terrorist attacks. His unique take on it places the third verse first, after which he sings the usual first verse. In the third verse (see below), the author scolds the materialistic and self-serving robber barons of her day, and urges America to live up to its noble ideals and to honor, with both word and deed, the memory of those who died for their country. Symbolically, Marian Anderson (a noted opera singer of her day) sang a rendition of America on the steps of the Lincoln Memorial in 1939 after being refused use of Constitution Hall by the Daughters of the American Revolution because of her skin color.

When Richard Nixon visited the People's Republic of China in 1972, this song was played by Chinese as the welcome music. Interestingly, the Chinese characters for United States literally mean "Beautiful Country."[4]

The song is often included in songbooks in a wide variety of religious congregations in the United States.

If you missed it, (the long awaited?) Conan O'Brien segment showing some of his experiences at the Anaheim Convention finally aired on Friday, October 2. A special "Livewire" came from Nashville that day saying that they were 95% sure that the piece would be appearing on The Tonight Show that evening.

You can see the video, as well as the Society commentary about it, by clicking on the BHS link at the top right of the Bulletin page.