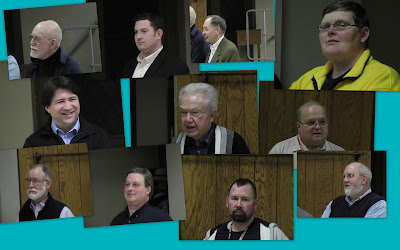 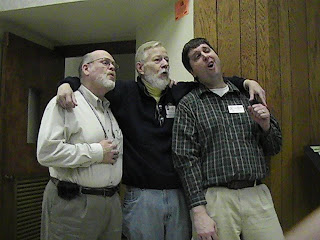 ing by the chorus, chapter quartets and , of course, the guests. Finally, pizza and soda were enjoyed by all and there was even more singing. Six of these guests returned for the next chapter meeting on 4/21. 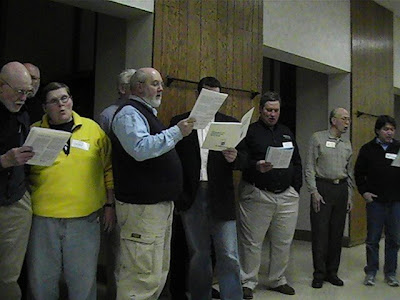 Barbershopper of the Month
March, 2009 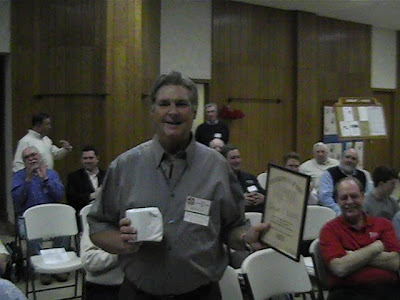 For his hard work and dedication that contributed to making our 62nd Annual Show a success, Jim Elliott was awarded the BOTM award for March. Jim has already begun plans for next year's show, so jump on the bandwagon early. There are always enough jobs to go around. Congratulations and thanks again Jim for all that you do.

At the top of this page, there is a new link for the Barbershop HQ Blog. This is a way for barbershoppers to have interactive contact with each other and with The Society. It is the latest communication tool that has been made available to Society members, so be sure to check it out.

91. Always show up prepared for a performance, correct uniform/costume, correct make-up (if applicable), warmed up and ready to perform.

92. Offer to help build props for your annual show.

93. Support all of the barbershop organizations (SAI, SPEBSQSA, HI) and fellow chapters/choruses by attending every show and event you can in your area. We are all in this together!

94. When travelling, try to visit a chapter meeting wherever you happen to be.

95. Be mindful of members' individual personal lives; everyone can only give what they personally can. Take what you can get from each member and encourage them to be happy. Relax and enjoy the hobby.

96. Support youth outreach however you can, take your quartet to a local high school and give a presentation on barbershop harmony.

97. Never give anything less than your best effort every time you sing.

98. Give "100 Ways You Can Take Part in Your Chapter" to your bulletin editor.

99. Distribute "100 Ways You Can Take Part in Your Chapter" to new members.

100. Keep the Whole World Singing and Harmonize the World!

This is the final installment of "100 Ways.....". Thanks to Bob Pyron of the Boston MA Chapter for making this list available. We should be encouraged by the large number of our chorus members that are already doing many of the things on the list. Let's all try to add one or two of these activities to our "to do" list in the near future.

God Bless America was written by Irving Berlin in 1918. He was serving in the army at the time and the song was written for a show that was being organized. Berlin didn't think that the song really suited the show so he put it aside.

In 1938, when Kate Smith asked Mr. Berlin for a patriotic song, he remembered his earlier composition. He made some revisions and the song was introduced by Kate Smith during a radio broadcast on November 11 (Armistice Day) of that year. It was considered a "peace" song.


Woodie Guthrie, the singer and songwriter noted for his social and political commentaries, was not a fan of Irving Berlin's song, so in response, he wrote "God Blessed America For Me". This song was later retitled "This Land Is Your Land" and has become a patriotic anthem in its own right.

The Chorus At Progressive Field

The Derbytown Chorus will being singing The National Anthem before the Indians-Yankees game on Sunday, May 31. We hope that you will be able to join us, either as a participant or a spectator. Tickets are $20 per person. Contact Ray Stone for more information.

If you thought that the unknown chorus member whose bio appeared in the 4/13 issue of the bulletin was, our Chapter President, Wil Veith, you were correct. Thanks for sharing, Wil.


How About More Quartet Singing?


(Watch for the next bulletin issue on Monday, May 11)
Posted by Derbytown Chorus Bulletin 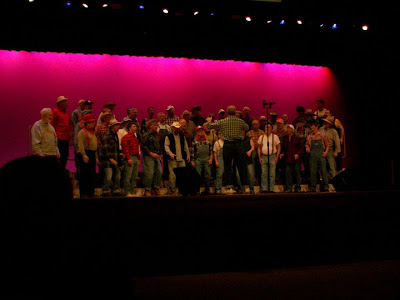 The 62nd Annual Show has come and gone and what a show it was. Jim Elliott, the show committee and all who helped to plan and organize this show are to be congratulated. Of course, all of our chapter members who performed can take pride in being a part of the overall success of the show. Our guest quartets, Old School, Happiness Emporium, Almost Famous and Over Easy were fantastic as were the chapter quartets. Even though the SPEBSQSA name has faded a bit in favor of BHS, we can still preserve and encourage our hobby with shows like this one. So, what do we do next year?

81. If you find yourself with some free time, call your president and offer to help.

82. Donate a barbershop tape or CD to your local library.

83. Send a barbershop CD to a local radio station and ask for airplay.

84. Help set up blackboard/flip chart/dry erase board, whatever is used to teach craft during rehearsal.

86. When offered a stick of gum or breath mint, accept it.

89. Lend a fellow member a barbershop tape or CD that they haven't heard.

Quote of the Day

I think music itself is healing. It's an explosive expression of humanity. It's something we are all touched by. No matter what culture we're from, everyone loves music. Billy Joel

ie, PA, but also lived in Columbus, OH. As a young man, he was in several bands, playing trombone. Chorus, choir and glee club provided lots of opportunities to sing. There was also participation in sports, mostly basketball. With all this, he still found time to work on the farm.

Our mystery member has 2 children. He has been a college professor and developed technical software for engineering applications. He also wrote taxes for H & R Block. His degrees include both an MS and a PhD in Mathematics and an MS in Computer Science.

This man's hobbies include; Sudoku, crosswords, reading in the history and technology fields, politics, tutoring, gardening and camping with the Scouts.

He is a past president of the Hudson BOE, a convention delegate, and a member of Jaycees, Rotary, and other civic organizations.

Not to give away any big hints, but this member says that he sings in the MOST FUN section of the chorus.

(Watch for the identity of this chapter member to be revealed in the 4/27 issue of the bulletin.)

While rummaging around in some of my old files, I recently found a copy of "In the Shade of the Old Apple Tree." On the cover of this music there is an intriguing picture of a quartet (The Empire Quartette). Three members of the quartet appear to be typical gentlemen of the time when the music was published (1905). They are neatly attired in suits, ties, and hats. Their poses are relaxed, but they also appear to be serious and dignified. The fourth member (a baritone?) wears no tie and his bowler is pulled down to his ears. He needs a shave, and, judging from his faint grin and sleepy looking eyes, he might recently have had two or three drinks too many, or several late night gigs.

The picture makes it obvious that the Empire Quartette was a comedy group. It also seems likely that it was a popular quartet. Whoever thought of the pose certainly had a sense of humor. Almost a century after its publication, it still strikes me as funny.

It isn’t hard to imagine all sorts of hilarious scenarios involving the three well dressed guys and the bum. On the other hand, the song’s lyrics and music don’t seem to lend themselves to comedy.

No matter how it was performed, however, the song was destined to be a hit. The words were written by a Chicago native, Egbert Van Alstyne, and the music was composed by Harry Williams from Faribault, Minnesota. (Burg Szabo has pointed out that this was not the same Harry H. Williams who was one of the writers of "It’s a Long, Long Way to Tipperary.") Van Alstyne and Williams collaborated on several other songs (including "Won’t You Come Over to My House?" and "I’m Afraid to Come Out In the Dark.") "In The Shade of the Old Apple Tree," however, was their most successful publication.

It has remained a favorite during all of the years since its publication. When I joined SPEBSQSA in 1971, it was a Barberpole Cat number. Like most of the popular songs written around the turn of the century, it’s especially good for woodshedding.

If you know Petula Clark from the British Invasion of the 60's and songs like "Downtown" and "Don't Sleep In The Subway", you might be surprised by the following video from 1949.

Just another quick reminder that the Derbytown Chorus will be singing The National Anthem at Progressive Field on Sunday, May 31. This will precede the 1:05 game between the Indians and the Yankees. We certainly hope that you can join us for this event.