Even though the holiday season can be hectic and world events are, at times, stressful, it is good to take time to think about all the things in our lives for which we are thankful. As barbershoppers, we appreciate the music of this time of year. Songs like Over The River And Through The Woods and We Gather Together bring back many memories of past Thanksgivings. Let's look at some lyrics of two more Thanksgiving songs that express the spirit of this holiday.

Now Thank We All Our God

In conclusion, here with a Thanksgiving message is
Moose A. Moose

#1 We will be singing on Wednesday, November 26, at the John S. Knight Center, as part of the 27th annual Akron Children's Hospital Tree Festival. All Chapter members are invited. Please be there in time to warm up at 11:30. Wear the red chorus shirts (or white Matinee Singers shirts if you don't have the red one). Black pants and shoes, also. We will be singing Christmas songs plus others, so bring your holiday songbook if you have one.

#2 The 2008 December Dinner Meeting will be held at Anthe's At The Lakes on Saturday, December 13. The address is 4315 Manchester Road, Akron. There will be an open bar at 6:00 followed by dinner at 7:00. The cost for guests is $25 (chapter members are paid for by the chapter). Dinner choices are: lemon herb chicken, Swiss steak, or broiled scrod. Your entree choice needs to be made by Tuesday, December 2. Chapter officers will be installed at this meeting and the 2008 BOTY award will be presented.

Since no chapter members are celebrating birthdays between 11/24 and 12/7, we are recognizing composer Scott Joplin, who was born on November 24, 1868. Most people associate Scott Joplin with ragtime music, but much of his early experiences were associated with quartet singing. In 1894, he founded the Texas Medley Quartet, which he took on tour. This was actually a double quartet that included two of Scott's brothers, Will and Robert. A more in depth description of Scott Joplin's quartet connections can be found in the book, Four Parts, No Waiting. A Social History of American Barbershop Harmony. This book was written by Gage Averill and was published in 2003. Maybe you could ask Santa for a copy of this book.

You're As Welcome As The Flowers In May 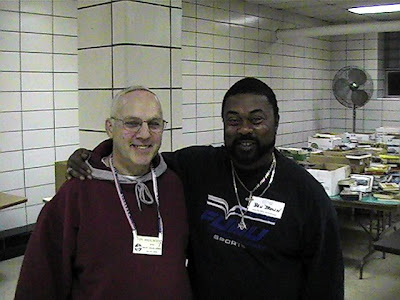 When You And I Were Young Maggie 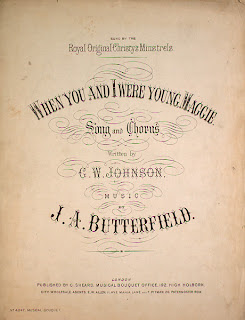 George Washington Johnson, a teacher in Ontario in 1859, became enamored with a local young lady named Maggie Clark, one of his students and three years his junior. As part of his courtship, he wrote a poem entitled, When You And I Were Young, in which he told of his hopes for their long life together. The poem was published in Canada in a collection called Maple Leaves. George and Maggie were married in 1864. After a short time in Buffalo, NY, the couple moved to Cleveland, OH. Tragically, on May 12, 1865 after only seven months of marriage, Maggie passed away. George returned to Canada and became a professor of languages at the University of Toronto. He died in Pasadena California in 1917.

James Butterfield had a music publishing business in Indianapolis, IN. He read George's poem, liked it and set it to music in 1866. It is not known if George and James ever met.

The Society's Heritage of Harmony Songbook has a great arrangement of this song.

Here is a video of a quartet from Australia singing "Maggie".

by Bulletin reporter, Bob R. Shoppe. Comments made by Mr. Shoppe are not necessarily those of the chapter or any other human beings on the planet.

Do you notice anything odd about that Australian quartet in the video above? Those guys are way too skinny. I am pretty sure that there is something in the Society bylaws that says that at least one guy in any registered quartet has to weigh more than 200 pounds.

We have all heard about the importance of making sure that your audience can understand what you are singing. Here is an illustration of what can happen, using Joe Cocker's Woodstock performance as an example.

The next bulletin issue will be on Monday, December 8
Posted by Derbytown Chorus Bulletin

On Tuesday, Nov. 11th, we celebrate Veteran's Day. On that day, we honor all men and women, both living and deceased, who have served their country in the armed forces. In 1919, President Woodrow Wilson proclaimed Nov. 11th as Armistice Day. This was to commemorate the end of World War I at the 11th hour of the 11th day of the 11th month. In 1954, Congress changed the day to Veteran's Day.

Here is another reminder about the Annual Dinner Meeting. This year, we will gather at Anthe's on the Lake, 4315 Manchester Road, on Saturday, December 13th. A cash bar will open at 6:00 and dinner will be at 7:00. Chapter members are free and guests are $25.(Note: This is a $5 increase from the price quoted earlier) There are three menu choices: lemon herb chicken, swiss steak, or broiled scrod. The deadline to sign up is December 2nd. We will also be awarding BOTY that night so fill out your ballot forms soon.

The three "guests" in the picture below showed up at rehearsal on October 28th. Maybe we should be more selective when we hand out those Chapter cards. 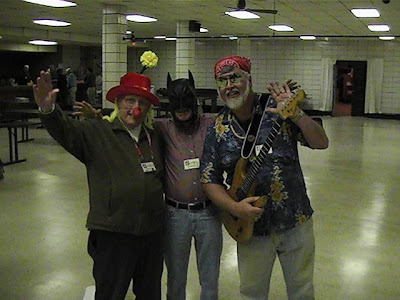 The BHS has started an online program that teaches tags, using video clips. Here is an example below, featuring James Estes. James visited our chapter a couple of years ago.

If you haven't been checking the links at the upper right hand corner of the bulletin page, you may be overlooking some important information. JAD and BHS information is not usually included in the bi-monthly bulletin because you can get it through these links. For example, the JAD site currently includes: (1) a discussion of COTS (not called COTS anymore) that is coming up in January (2) an article about Cadillac Jack, our District quartet champs and much more. The BHS website has sometimes been down recently, so if you try to go there and nothing happens, try again later.

You Are My Sunshine

This song was first recorded in 1939, by The Pine Ridge Boys. It was a

country song at that time, but has taken on many other identities over the years, including of course, barbershop. If you want to check out some versions of this song on YouTube, look for the duet of Johnny Cash and Bob Dylan, the Ray Charles blues version and a Doris Day polka rendition.

Jimmie Davis and Charles Mitchell are the credited songwriters of "You Are My Sunshine". Davis bought the song and rights from Paul Rice and put his name on it. This was not unusual in the pre-WWII music business. When Jimmie Davis ran for governor of Louisiana, he played up his connection to the song, singing it at all his rallies while riding a horse named "Sunshine". Maybe it helped because he served as governor from 1944-1948.

Here is a video of of a fictitious, western swing group called Jimmy Wakely and the Sunshine Girls in 1940, doing their version of the song.

Chapter member Mike Halter brought the following video to the attention of the bulletin. Hope that you enjoy it as much as we did.

Watch for the next issue of the bulletin on November 24.
If you have information that you would like to have included in the bulletin, send it to derbytown08@gmail.com or give it to Bill Halter at rehearsal.