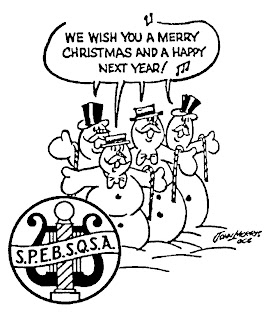 Christmas Issue 2008
What Fun It Is To Sing During The Holidays!

On Saturday, December 13, we gathered at Anthe's at the Lake for the Annual December Business Meeting/Dinner. The total attendance (chapter members and guests) was 87. Thanks to Jim Elliott for his work organizing and coordinating this event. After a delicious meal, it was time for the business part of the evening.
The feature event of the night was the awarding of the 2008 Larry Neal Memorial Award, also known as the Barbershopper of the Year (BOTY) Award. Last year's winner, Jerry Mason, announced the winner of the award to be Kirk Roose, director of the Derbytown Chorus. Congratulations, Kirk and thank you for all your work on behalf of our Chapter, our District and our Society. (Note: Kirk could not be at the dinner. The bulletin will include a picture of Kirk and his award in a later issue.)
The 2009 Board members were also officially installed during the meeting. Congratulations to all new and returning members of the Board and good wishes for a successful year. Special congratulations to Wil Veith, our 2009 President. Also, a large thank you to Ray Stone for his multiple-year tenure as President. 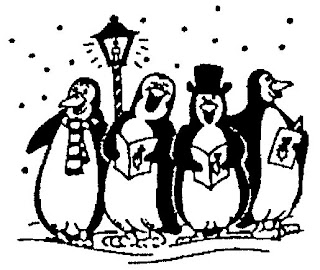 The evening concluded with singing by the chorus and chapter quartets. A very appropriate finish to a great event.

We're On The Move

In January of 2009, we will be moving to a new rehearsal location. Tuesday, January 13 will be our first rehearsal at Holy Trinity Lutheran Church, 50 North Prospect Street, Akron. In preparation for this move, a group of chapter members met at Saint Bernard's on Saturday morning, December 13, to organize and sort our chapter inventory of music and equipment. The next item on the agenda is the actual moving of these materials, which will take place on Saturday, January 10. All chapter members are invited to participate in this job. The more, the merrier. Who know 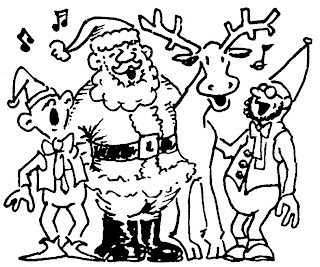 On Wednesday, December 31, The Akron Derbytown Chorus will sing at Saint Bernard's Church as part of the 13th Akron First Night Celebration. We sing from 9:00 pm to 9:50 pm. The chorus has been involved in every First Night. The uniform of the evening is TUXEDO. Please be there, dressed and ready to warm-up at 8:15. There is a sign-up sheet at rehearsals. 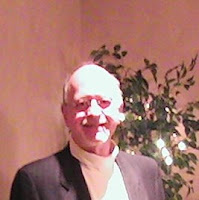 Congratulations to Stan Martin for being selected as Barbershopper of the Month for November, 2008. Stan coordinated the chorus participation in the Salvation Army Red Kettle Campaign at Chapel Hill Mall and also played a major role in our assessment of Holy Trinity Lutheran Church as a potential rehearsal location.

11. Take your camera to chorus functions, and turn in the pictures to your history book/scrapbook person.

12. Subscribe to the "Harmonet," print out hints & suggestions that look applicable to your chorus and pass them on.

13. Talk to two or three people (before, during break or after rehearsal) that you normally don't talk to.

14. When you are at social gatherings, quartet performances, etc., always talk about your chapter; you never know where your next guest might be.

15. Surprise an ill member with a card or a phone call. Call an absent member, and let them know you missed them.

16. Offer to clean the chapter's storage facility or update the inventory.

17. Keep your comments to yourself concerning choreography and costumes, especially when on the risers.

19. Offer to carpool with others when possible.

20. Learn to use a pitch-pipe, and then memorize the keys to songs in the chorus repertoire.

Many singing groups find themselves in demand during the holidays. Clear Choice, one of our chapter quartets has been very busy. The quartet includes: Dan Nichols, tenor; Ray Stone, lead; Jim Elliott, bass; Bill Halter, baritone. Here are some of their recents "gigs". 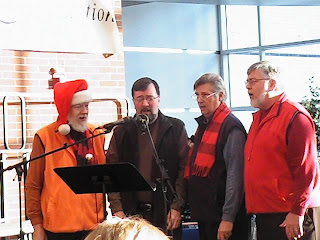 Saturday, November 29- Barberton Holiday Kick-Off for the Salvation Army. Sang a few songs at the gazebo on the shores of Lake Anna; did a 30 minute show for about 250 people at the Magic Theater in downtown Barberton; finished the evening by singing at the Red Kettle near the Salvation Army headquarters. 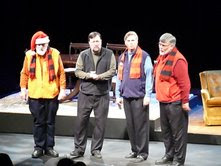 Friday, December 12- sang at a luncheon for Hudson city employees at the American Legion Hall in Hudson.

Friday, December 19- did a 30 minute show for employees of The Crystal Clinic (about 350 people) at Guy's Party Center, Akron.

Christmas Wishes From The Bulletin Staff

For all those who enjoy singing, this time of year is especially full of joy. All of us on the bulletin staff want to wish all Derbytown barbershoppers and friends of the chorus a Merry Christmas and a Happy New Year. The next bulletin issue will be on Monday, January 12 and will originate from North Fort Myers, Florida. Information and pictures that you would like to have included in future bulletin issues can still be sent to the bulletin email address, derbytown08@gmail.com

In this special Christmas issue, it seemed appropriate to include a variety of holiday music. The following items are not meant to overwhelm you. You can look at them all at one sitting or check them out over a period of time. The two phonograph clips are for those who remember when recorded music meant 78RPM, not MP3.

Bing Crosby
If you want to be an honorary bulletin "investigative" reporter, see if you can discover the name of the quartet that provides the male voices in the back-up vocals on Bing's 1942 recording. They had a rather varied and important career on their own. The only hint is these four words: Fibber McGee and Molly. The hint might mean more to the more mature members of the Chapter. If you can't find the answer, or if you just don't care, the answer will be in the next bulletin issue.

The Drifters
This recording features Bill Pinkney, lead bass and Clyde McPhatter, tenor. The very clever cartoon is the work of Joshua Held. 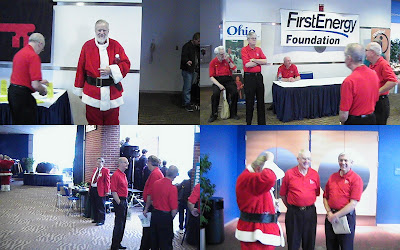 Many members of The Derbytown Chorus gathered at the John S. Knight Center at noon on Wednesday, November 26. We had been invited to sing as part of the Akron Children's Hospital Annual Tree Festival. Under the direction of Dan Nichols (aka Santa), we sang both Christmas and barbershop songs for an appreciative audience. Thanks to all who helped to make this performance happen.

The Summit Chordsmen In Wadsworth 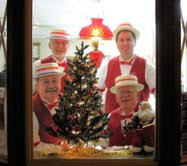 The Summit Chordsmen, a chapter quartet, entertained at the Christmas Candle Walk in downtown Wadsworth on Friday, November 21. Lead, Jim Heaton; Bass, Mike Sitter; Baritone, Jerry Mason; and Tenor, Mike Halter sang for festival patrons in a very appropriate location, a barbershop. The Chordsmen say that there was a steady stream of eager listeners through the shop between the hours of 6 and 8. Shop owner, Melissa Vetter was serenaded when the quartet sang "Little Darlin'", specifically for her.

The Songs We Sing
(Who Was That Reindeer, Anyway?)

At our rehearsal on November 25, as we sang "Rudolph, The Red-Nosed Reindeer", a question was raised about the correct name for Rudolph's colleague, Donner. The name Donder was mentioned as another possibility. After a little research, it turns out that this question is more complicated than we tho 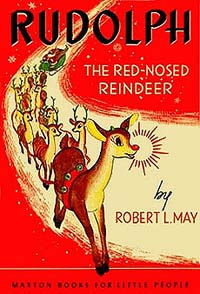 ught. It's actually not something that could be resolved in this publication, but here is a brief description of the controversy. If you stick to the the period from about 1950 to the present, the name Donner is correct, because that is the name given to the reindeer by the composer of the song. Johnny Marks wrote the song in 1949, using the character that had been developed by his brother-in-law, Robert L. May , for a 1939 Montgomery Ward ad campaign. It became a big hit for Gene Autry, the singing cowboy. The questionable part relates to the time before the song was written. In the song, the list of reindeer relates to those listed in that famous poem, " A Visit From Saint Nicholas". The last two names in the list, Donner and Blitzen, are the German words for thunder and lightning. Since the poem is attributed to Clement Clarke Moore, who is of German descent, this makes sense. But in 1823, the poem, published anonymously in a New York newspaper, uses Dunder and Blitzem (Dutch) as the reindeer names. Music historians claim that the poem was actually written by Henry Livingston, Jr. who was Dutch. Moore's association with the poem did not come about until he included it in a publication of his poems in 1844. The name Donder is also found in some copies of the poem. There is still some controversy about the true origin of this poem. Luckily for us, we are dealing with the post 1950 song lyrics and Donner is correct in that case.

On 11/25, Ron Weaver was a guest at our rehearsal. Many chapter members knew Ron from the past and he contributed much to our meeting. Ron is shown below teaching a tag during the afterglow. We are starting this feature, listing 10 items each issue for the next 10 issues. It's encouraging to note that many of our members are already doing these activities. This list was collected from the Harmonet by Kim Benner, Singing Buckeyes, Columbus Ohio.

1.) Bring a guest to rehearsal once a year.
2.) Show up early and help set up the risers.
3.) At the end of rehearsal, help take down the section of risers you are standing on.
4.) Thank the director for all his/her effort.
5.) Thank your chorus administration for all their work.
6. Bring in doughnuts on your "barbershop anniversary" night - bring in a special treat for after rehearsal.
7. Don't talk on the risers; and don't let others talk on the risers.
8. Smile. Act like you're enjoying your hobby, and show it (let the director know you're "really" there).
9. Take your quartet to retirement homes, and share your hobby. Family members are often there visiting and recruiting new members is part of your performance.
10. Volunteer to do a little more than you really want to in fundraising or committee work.

New member, Cory Hornish, received his official membership materials at our 12/2 meeting. Cory, on the left, is shown below with D'Artanyon Stanard, whose efforts brought Cory into our chapter. Congratulations to both young singers. 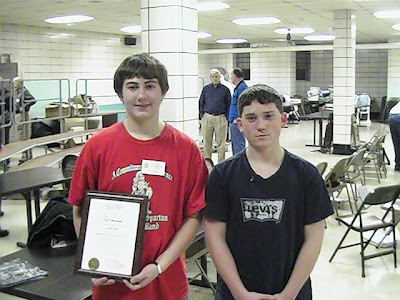 The Latest Tag From James Estes

Watch for the next issue of the bulletin on Monday, December 22
Posted by Derbytown Chorus Bulletin

On Wednesday, Dec. 3, a group of chapter members took a tour of Trinity Lutheran Church. We were evaluating the social hall and some related rooms as a potential rehearsal location. You can get an idea of what we saw by clicking on the picture below and viewing the album. Be patient if the pictures seem out of focus at first, it will clear up. You can also change the viewing time for each picture to get a longer view. Captions have been added to some pictures to give a little more background information. As with any location, there are pros and cons. These will be discussed at the board meeting on Monday, December 8th.