The 2009 Singing Valentine's program was a great success. All those who participated are to be congratulated. A total of seven quartets delivered 33 Valentines during the Feb. 13-14 period. In addition to a lot of goodwill, fun and PR, the activities provided a significant increase in the chapter treasury.

In earlier communications, you saw Spotlight and some other chorus members providing a romantic setting for a young man to propose marriage to his lady. Nothin' says lovin' like a barbershop quartet.

Below are two photos of The Summit Chordsmen delivering Valentines to (left) Kim Halter(wife of Mike) and(right)Kathy Lilley(wife of John). 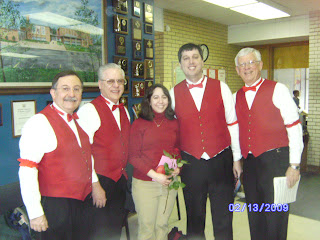 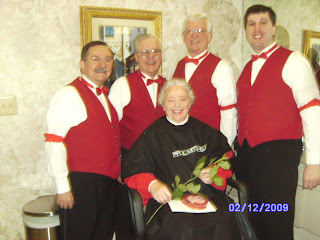 Congratulations again to Rip Wilson for coordinating the event assisted by Mike Halter and to all who helped to make it a success. Special note to Chris Eitman and Dennis Conrad, assisted by Bob Horning and Mark Nedal for manning the operations center and to Robin Reid and Vic Estafen for serving as driver/photographers.


Getting To Know Us

In the 2/9 issue, the mystery chorus member was no other than Terry Arman. Did you guess correctly? Watch for a new mystery singer in the first March issue of the bulletin. Thanks to Terry for sharing his information with us.

100 Ways To Help Your Chapter
(part of a continuing series)

51. Man the guest registration table with a smile and a section buddy to help the guest(s).

52. When flyers are made for chapter events (shows, membership drives, etc.) take a few and commit to posting them in various places around town.

53. Sponsor a young person to an International, District or Chapter youth outreach camp.

54. Learn your words, notes, choreography, interpretation to the songs the chorus is singing. Be the singer in your section that others look to for help.

55. Start your mental warm-up in the car on the way to rehearsal.

57. Take care of your chorus outfits and accessories; be sure they are always cleaned and pressed according to directions, so that you and your chorus look your best and your clothing lasts a long time.

58. Put a picture of your chorus up in your office, and talk to anyone who asks about it.

59. Save those "important questions" of the director/section leader/your neighbor, until the break or after rehearsal.

60. Make coffee/tea or whatever for break time.

The tenth of eleven children, he was born in Lawrenceville, Pa. on the 50th anniversary of his country's Declaration of Independence. By the time he reached his teens, his love of music was already becoming apparent. He had written the Tioga Waltz and Open Thy Lattice, Love. This latter song was published in Baltimore, Md. when he was only 16 years old, his first published work.

Stephen Collins Foster wanted to create music. His folks wanted him to do something worthwhile with his life. Practicality won out, and he studied to be a bookkeeper. After three years in the trade, his music began bringing in money, and his life's true work was set. It is believed that he became the first American composer who was able to support himself solely by writing music.

One of his big hits was Way Down Upon The Swannee River. However, under the terms of an agreement, E. P. Christy, of Christy Minstrels fame, got to claim authorship and Foster got $500. Other of his songs were My Old Kentucky Home, Jeanie With The Light Brown Hair, Old Black Joe, Oh Susanna, and Nellie Was A Lady.

All in all, he wrote over 200 songs. Many were in the last few years of his life, when his musical talents were on the wane and hits were hard to come by. He had become a pauper. On January 13, 1864, Stephen Collins Foster died from injuries he received from a fall in his New York hotel room.

Shortly before his passing, he had completed a piece that could have changed his fortune entirely. This was the lovely and haunting Beautiful Dreamer. Published after his death, it still ranks among the most enduring songs of his legacy. This song was declared to be a part of our Heritage of Harmony, being included in the society's collection of that name in 1988. You may want to try it yourself. It's a gem of a song when done in barbershop style.

In the last issue, we paid tribute to African-American singing groups for providing a large part of the American music from which our hobby evolved. In this second issue during Black History Month, we continue this tribute. Gentlemen, presenting: 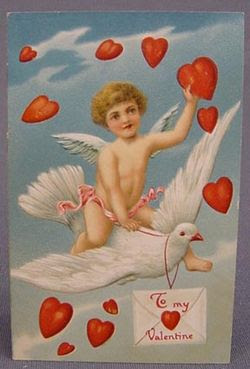 Have you purchased a card to send to your favorite Valentine(s)? The one shown above is an example of an early 1900's card. We have been sending greetings on Feb. 14 since the 1700's in this country. The tradition came here from Great Britain, where it flourished in the time of Chaucer. Of course, for barbershoppers, Valentine's Day brings thoughts of singing. So either in a quartet or just by yourself, make this Saturday special for someone with a serenade of one of the "old songs".

This man has been a barbershopper and a member of the Derbytown Chorus for 12 years. He was 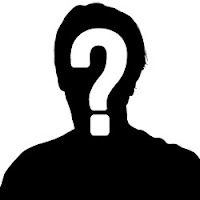 born in Akron but lived several years in LeRoy, NY. He is the oldest of five children, and as a Cub Scout and Boy Scout, enjoyed camping at Camps Manitoc and Butler. Along the way, he earned several merit badges and membership in "Order of the Arrow.

He first learned of the joy of making music in band class at Innes Jr. High. Singing for fun began in musicals at Kenmore High School. As a member of the youth choir at Akron Baptist Temple, he learned to lead and direct.

He has three children and three grandchildren and his main occupation was in transportation sales. He also worked as a trucking dispatcher, in office equipment sales and a weld machine operator.

His hobbies include golf as well as baseball history and collectibles. A life goal is to attend games in all 30 major league stadiums. He is at 17 and counting.

The important role played by African-American quartets and singing groups in the development of our hobby has been well documented. During February, Black History Month, we are featuring some of those groups. So here, for your listening pleasure are

Lead: How has your business been doing? I heard that you invested in a deli but it got into a jam and now you're in a pickle.

Tenor: Not only that! My paper company folded. I put the money I had left into a company that manufactures brakes, but it looks like it's on the skids. It's depressing.

Bari: I know what you mean. I put money into a dry cleaning shop, but it washed out. Then my balloon company was a victim of inflation. I'm about ready to give up.

Bass: My bakery lost all of its dough and the bowling alley I bought was hit by strikes.

43. Contribute to your chapter's charity fund.

44. Don't invite prospective members to a chorus rehearsal where the chorus will be spending three solid hours on the risers. Varied meetings/rehearsals are the key to pleasing everyone.

45. Learn show music quickly so it can be polished to contest standards.

46. Volunteer to help with another area of "show business" such as script writing, costuming, staging, emcee work, hosting, afterglow, etc.

47. Sell show tickets to as many friends, family members and strangers as possible.

48. Practice your facial expressions in a mirror.

49. Thank your women's auxiliary. (Should we form one?) 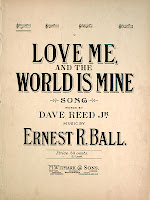 ke all side conversations out of the rehearsal hall.

the World Is Mine

"Love Me And The World Is Mine" is truly a good old song. [Some recent quartets have revived it, but] twenty years ago, barbershoppers often sang it wherever they gathered. It was, in fact, at one time a Barberpole Cat song.

It is described in the Heritage of Harmony Songbook as having "unusual structure and fine poetry." Sigmund Spaeth called it a classic, and wrote that it is "a masterpiece in its economy of materials, giving singers the impression that they are covering a tremendous range, although it is actually less than an octave from the lowest to the highest note of the melody."

The music was composed by Ernest R. Ball, who also composed "When Irish Eyes Are Smiling," "Mother Machree," "Dear Little Boy Of Mine," and "Let The Rest Of The World Go By." Not much is known about David R. Reed, Jr., the man who wrote the words, except that he published songs and that many of these were sung in Broadway shows between 1894 and 1923.

When they collaborated on "Love Me And The World Is Mine" in 1906, Ball and Reed produced a fine song that all barbershop singers can enjoy.

Here are Ringmasters at the recent Youth Chorus Festival in Pasadena, singing "Love Me and the World is Mine". (I have to issue a Goosebump Alert on the new tag.)