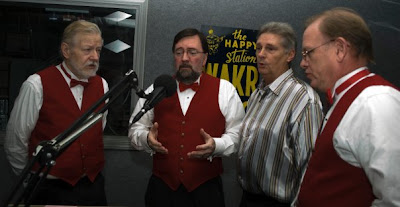 gram. Chapter quartets once again provided a wonderful way for the expression of love at this special time of year. Clear Choice made an appearance on the early morning WNIR radio show to promote the program, and chorus member Chris Eitman sang lead in a quartet and concluded this singing valentine with a proposal of marriage to his then girlfriend, now fiance. Congratulations Chris and Sabra.

There has already been much interest in barbershop generated by this weekend of singing, including interest in the annual 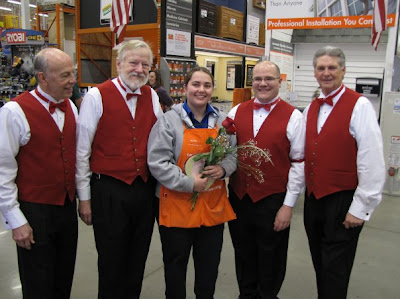 show, and potential gigs for chapter quartets. Again, thanks to all who participated in any way and lets work to make this program continue and grow in the coming years.

Our Chapter has developed a great connection with baseball through our chorus and quartet performances for the Indians and the Aeros. Here is a another connection between our hobby and the Grand Old Game.

The music to "Take Me Out To The Ball Game," 1908, was written by Albert Von Tilzer, brother of Harry Von Tilzer, who gave us many barbershop songs. When Albert wrote the music, he had never seen a baseball game. (Source: PBS radio broadcast)

Check the "Featured Chorus " link at the top right hand corner of the Bulletin page to visit this issue's group of barbershoppers.

The important influence of African-American singing groups on the development of barbershop has been well documented. This influence begins around the turn of the century and continues to this day. To honor that contribution, let's listen to The Mills Brothers sing one of their classic numbers.

Alexander Graham Bell applied for his patent on the telephone, on the Valentine's Day, 1876.

At a gathering that was the best attended Mid-Winter convention ever, four Senior quartets from our District impressed the audiences well as the judges.


The reigning JAD Senior Quartet Champions, Lightly Seasoned, finished in fifth place in the field of 27 quartets. That entitled them to return to Ohio with bronze medals. 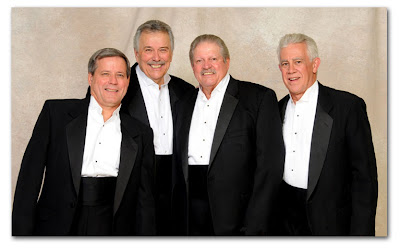 Other JAD quartets also fared well in the eyes of the judges. "Test Of Time" finished 12th, "Over Easy", 16th and "Riverblend" 17th. Congratulations to all these quartets for representing our District and letting people know that barbershop is alive and well in our part of the world.

Any SPEBSQSA member who's not a member of another chapter is a member of the Frank Thorne Chapter. This is the largest chapter there is. So who is Frank Thorne? Here is an excerpt from "Melodies for Millions", by Will Cook, published in 1965 for the 25th anniversary of the Society.

. . . Frank Thorne, International President in 1946 and 1947. He was medium tall, slender, balding, very distinguished, with a mustache; he presented a commanding appearance but at the same time seemed to have a twinkle in his eye. He was an excellent business man, being vice president of one corporation and president of several others as well as a member of the board in additional companies. Frank was a good instrumental musician and a fine singer; he sang bass with the 1942 International Champion Elastic Four.

Frank's trademark in the Society was his writing longhand notes in the margins of letters sent to him to mail back as replies. One of his most famous replies was one he addressed to then International Secretary Carroll Adams; at one point on a margin of a letter several pages long, Frank wrote: "Nuts!"

Frank Thorne was one of the most aptly named men; Frank was really "frank!" He had a way of making comments and offering constructive criticism which was startling in its bluntness and brevity, but you remembered what he had to say and you knew he said it for the good of the Society or your own personal good. He was outspoken but never mean or vindictive.

He had a sense of humor too. He was asked by the Executive Committee several years prior to his death to talk to a recalcitrant District President, one who called a lot of us Communists and was really stirring things up. Frank was asked to tone him down.

When reporting on his success he opened the conversation by saying, "I talked to God last night."

He was an excellent correspondent and took great pains to say the right thing and to be as helpful as possible in letters to arrangers and quartet men.

In past Bulletin issues, this section has been used to help us find out more about the members of The Akron Chapter. For a while, we are going to shift gears a bit and give our members a chance to find out about other chapters around the country and the world. At the bottom of the "Hot Links" list at the top right of the Bulletin page, you will find a link to the webpage of the first featured chapter. Use this connection to make a cyber-visit to this group of barbershoppers.

It may be cold and snowy where you are, but if you jack up the thermostat, put on shorts and a Hawaiian shirt, get a frosty beverage and listen to this performance, it's almost like you were there. (Here is the 3rd place Senior quartet, "Take Note".)

Did The Younger Set Go To Tampa? You Betcha!