The nominating committee, consisting of Vic Dandrea, Jim Heaton, and Bill Halter has announced that the slate of officer candidates for next calendar year is complete. Just like the old "chicken in every pot" slogan, we have a candidate for every office. The candidates are listed below:


At our regular rehearsal on Tuesday, September 29, we will vote on this slate of candidates.

The nominating committee thanks these chapter members for volunteering their time and talents to lead The Derbytown Chorus during the coming year. We also express our thanks, on behalf of all Chapter members, to the 2009 officers for their hard work. Their efforts have produced another successful year, both musically and socially.

How Did We Measure Up? 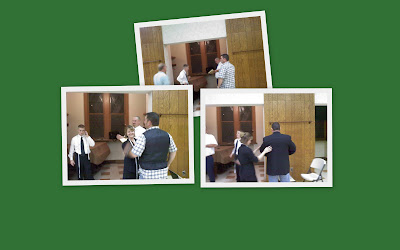 (click on collage to enlarge )
All Chapter members in attendance at our rehearsal on 9/22 were "sized up" Not by law enforcement officers, but by representatives of American Commodore Tuxedos. This was in preparation for getting our new tux shirts to wear for District Contest. Full measurements were taken so that the information is available should we decide to order other new chorus apparel in the future.

If you were not there to be measured, you can go to any American Commodore shop and have it done. Just make sure they know that you are with the Akron Chapter and the information needs to be sent to the Chapel Hill store.

If you plan to go to District Contest on October 17, you should get your measurements taken ASAP.

Mystery Man Revealed
The well-traveled Chapter member described in the 9/14 issue of the Bulletin was Robin Reid. The Bulletin Staff plans to 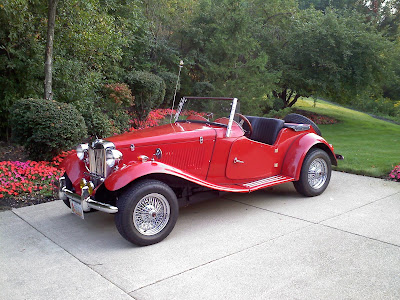 ask Robin to submit an article that would describe his experiences in those exotic locations. Maybe it's "007", secret stuff. Does the MG have machine guns and an ejection passenger seat?

Fish Fry With Singing On The Side

Many Chapter members attended a fish fry on Saturday, September 26 at Remsen Christian Church in Medina. An invitation had been extended by Chapter member Cliff Crocker, who is also a member of the congregation a 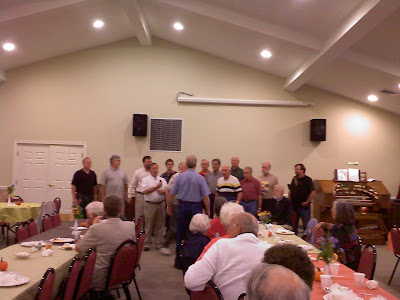 t the church. After a delicious meal, and with much arm-twisting (not), the chorus and some Chapter quartets provided a few songs to complete the evening. Thanks go out to Cliff for the invitation. We got to enjoy a great meal, socialize and present our hobby to a wonderful audience.

"Hush"
If you participated in the Mega Chorus at Apple Corps in 2008 or if you have been attending chorus rehearsals lately, you are familiar with our barbershop arrangement of "Hush". As with any song, there can be many interpretations. Here are two examples that, though quite different from our treatment, certainly convey the message of this classic gospel song.

Go Mbiedh Ag Canadh Ar Fud An Domhain!
No, the spell checker on the bulletin's computer did not go haywire. The phrase above, in honor of East Africa Barber Shop Singing in Uganda-EABSSU, says, "Keep The Whole World Singing", in Ugandan.

Since we make an attempt to woodshed a song at practice on a more or less regular basis, maybe you would like to know more about AHSOW (Ancient Harmonious Society Of Woodshedders) There is now a bulletin link to the ASHOW website. You can find it in the top right corner of this issue with the other Hot Links.

So far, you've seen two performances of a gospel song. Well, they say that good things come in threes, so here is one more. Maybe you've heard of these guys.

Here is the slate of candidates for Chapter offices, as of this date. As you will note, there are three position that are unfilled. This slate was presented to the members in attendance at the 9/15 rehearsal. Next Tuesday, 9/22, nominations for any office will be accepted from the floor during the business meeting portion of our rehearsal.

After all nominations are received and confirmed in writing, the members in attendance will vote on the slate of officers.

If you have someone in mind that you believe would be a good candidate for any of the offices, contact them and have them prepared to accept the nomination, in writing, on 9/22.

On Sunday, September 6, Ray Beckwith passed away in Cape Coral, Florida at the age of 86. Ray had over 40 years of membership in the Society, with the Akron and Elyria Chapters. He had continued his quartet singing after relocating to Fairhope, Alabama. He was also well known in real estate circles in this area, both as head of the real estate division of Ohio Edison and as owner of Marbeck Realty in Medina

Those who knew Ray will remember his passion for promoting barbershop to anyone who would listen. He was always ready to explain our hobby, to counsel a barbershopper who might be thinking of dropping out, and he always mentioned our Society during his quartet performances. Our veteran Chapter members will recall Ray's rendition of a spoken story during "That Old Gang Of Mine", with the quartet humming in the background. He was the only bass in the quartet Market Street Exchange. For the last few years of that quartet, it included current Akron Chapter member, Guyles Clifford singing lead.

Our thoughts and prayers are with Ray's wife of 62 years, Margaret, and his family.

The Lord doesn't charge you for time spent on earth singing 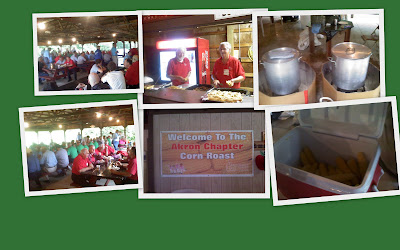 On Tuesday, September 8, the Akron Chapter held it's annual Corn Roast. Spearheaded once again by Dan Nichols, and supported by the usual army of volunteers who gave of their time and talents, the corn roast was a gathering of barbershoppers from northeast Ohio and beyond. 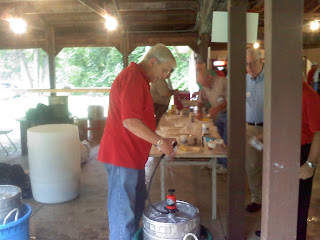 Before you sing, you have to have nourishment. With Dan Nichols and Jim Elliott dishing out coney dogs and kraut dogs and Mark Nedel doing a wonderful job of keeping up with this group's appetite for corn on the cob, nourishment was not a problem. Beverages were available on a serve-yourself basis, unless you could convince Chapter President Wil Veith to do the honors.

The "pop-up" quartets and VLQs that were heard during the meal set the stage for over three hours of chorus and quartet performances. Anyone who needs an explanation of the term "Brothers in Harmony", need only attend one of these corn roasts.

Congratulations and thanks again to Dan and all who helped to make the 2009 corn roast a success.

The mystery barbershopper for this month has been an Akron Chapter member since 1994. He was born in Purley, Surrey, England. Ok, so you already know who it is. Keep reading anyway because this is a very interesting biography.

Our unknown singer has three children and three grandchildren and fondly recalls a fun, care-free childhood that included climbing trees and "liberating" apples from farmers' orchards.


Though he has no military service, as such, he did ten weeks of basic training at Fort Knox, KY in 1968 during the Berlin Wall Crisis.

His main hobby is gardening and to a lesser extent, stamp and coin (UK) collecting.

Though he modestly admits that his accomplishments are too numerous to list, here are a few examples:

This barbershopper's identity will be revealed in the 9/ 28 issue of the Bulletin.

Repertoire-the songs that the singers are prepared to perform publicly

Election of the 2010 officers for the Akron Derbytown Chorus will take place during the business meeting at the 9/22 rehearsal. On Tuesday, 9/15, the slate of officers will be presented to the members and nominations will be accepted from the floor. Remember, if you intend to nominate someone for an office, get their ok prior to making the nomination.


New Tux Shirts To Be Purchased

Before District Contest on October 17, the chorus will be purchasing new tuxedo shirts. During the regular rehearsal on 9/22, sizing will be done. It is important that you attend this meeting so that your measurements can be included in the order.
Watch for emails on this subject.