Welcome to the first Bulletin issue of 2011. You may notice a difference in the appearance of this and future issues. These changes were done to better showcase the Chapter and also to make The Bulletin easier to read.

Another change is that there will be only one Bulletin issue per month, on the third Monday.

Something that hasn't changed is that the Bulletin will still emphasize sight and sound presentations related to barbershop singing in general and our Chapter in particular.

If it seems that The Bulletin doesn't always show the schedule of upcoming chorus events, remember that we have other Chapter publications that focus on that topic. On a weekly basis, we have "High Notes" by Robin Reid. In addition to being available at each rehearsal, "High Notes" is archived on the Chapter website. There is also the email newsletter by Jim Bishop.

The "Quick Connections" links that are shown on the left of the Bulletin page will provide an easy way to connect to online sites that allow you to keep up with what is happening in the barbershop community.
Also, keep in mind that you don't have to cover the whole issue at one time. This one actually turned out to be quite a bit longer than I thought it would. The Bulletin is always there, on your computer, whenever you have time to look at it. For the newer Chapter members, the archived issues are listed in the left column of the Bulletin. You can go all the way back to 2008 if you want.

So, that should be enough introduction. Enjoy this issue.

Multi-tasking Chapter Member
Over the years, Chapter member Mike Sitter has been someone who is always willing to pitch in and work. That was never more evident than recently, when Mike, as part of his duties as Archbishop of Canterbury, officiated at the royal wedding in London. All that and he still finds time to sing in a quartet. Hats off to you, Mike! 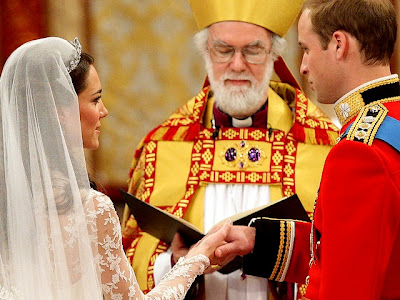 Some Songs Stand The Test Of Time
In the time period following The Civil War in America, the songs that were being written did not lend themselves to barbershop harmony. They simply didn't contain the type and variety of chords that barbershop required. One notable exception is "I'll Take You Home Again, Kathleen", written in 1876.

Here is a video of Ken Curtis, along with The Sons Of The Pioneers, singing this ballad in the 1950 movie "Rio Grande". You may remember Ken from his role as Festus on the "Gunsmoke" TV show. He didn't get to use his great singing voice much on that program.

A Salute To Harry

Harry Von Tilzer wrote barbershop favorites like "Wait 'Till The Sun Shines, Nellie" and "I Want A Girl, Just Like The Girl Who Married Dear Old Dad". Here is "Old School" singing another of Harry's compositions.

An Irishman named O’Leary, who loved to sing as he worked, bought a mule to farm his garden. The mule worked well, but was almost totally deaf. So, when his owner yelled "Whoa!" the animal often continued plowing.

Asked how the mule was working out, O’Leary shook his head. "There was a time," he said, "when all my neighbors could hear was me singing my lilting melodies. Lately, I’m afraid, all they’ve heard are my riled Irish whoas."

The concept traces back to an Edwardian musical, "Floradora", that featured a double sextet (above) and attractive young ladies that became known as "Floradora Girls" . The show opened in London in 1899 and then came to Broadway, where it became the first big hit of the 20th century.

Here is an adaptation of this performance in the 1930 movie "Floradora Girl" starring Marion Davies.

Since returning from Florida, I have taken on the task of converting some Chapter show slides into digital form. The time period for these slides is from the late 60's to 1980. Here are a few memories from the 1968 show. I would like to hear from anyone who might have recollections to share about this show.

Note: The bright onstage lighting and the distance from which these pictures were taken make it difficult to get high quality scans from the slides. I will work at trying to improve this process. 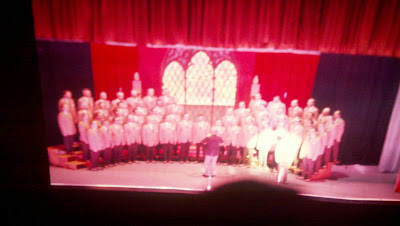 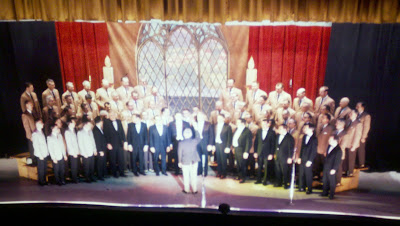 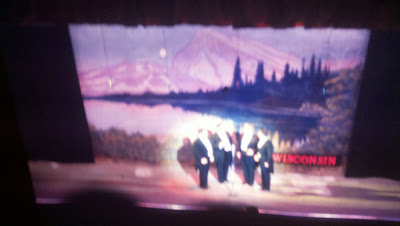 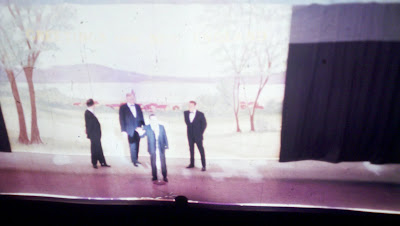 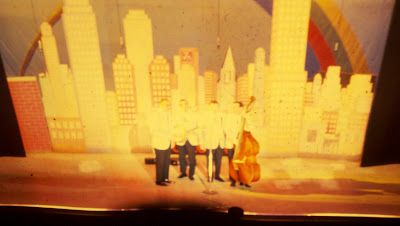 On Tuesday, May 31, at our regular Chapter rehearsal, we will welcome the Schoenbrunn Valley Chorus (and maybe Canton). Visitations are special occasions, so try to make sure to attend and enjoy the fun.