This Saturday is the Catholic holy day of All Saints' Day (All Hallows' Day). The previous day is All Hallows' Eve, from which comes the name Halloween. In 5th century Celtic Ireland, summer officially ended on October 31st. On that day, it was thought that spirits from all those who had died during the previous year would roam the land searching for a living body to inhabit during the coming year. People would dress up in scary costumes and parade around noisily so that no spirit would enter their body.

There was also a custom in 9th century Europe that became part of the Halloween tradition. People would do what was called souling by traveling from village to village and collecting small cakes filled with currents. In exchange for the cakes, they promised to pray for the deceased relatives of those who baked the cakes.

The Jack-O-Lantern also seems to have come from Irish folklore. The story is that Jack, a drunkard and generally nasty guy, tricked the Devil into climbing a tree and then trapped him there. When Jack died, he was not allowed to enter Heaven because of his bad deeds during his life. He was not allowed to enter Hell because of the trick he played on the Devil. The Devil gave him a turnip with a glowing ember in it to light Jack's way through the darkness. When Irish immigrants came to America, they found pumpkins to be more plentiful than turnips, so their "Jack's Lanterns" were made from hollowed out pumpkins.

For the past 40 years or so, the following song is often played on the radio or at parties during Halloween time. This clip shows Bobby "Boris" Pickett singing the song that he originated. This performance, in 2006, was his last before he passed away.

There will be a novice quartet contest during our chorus rehearsal on Tuesday, October 28th. This is a "just for fun" event so plan to participate. There will be time for practicing on Tuesday. The only rule is that no more than 2 members of your quartet can be members of a registered quartet. Pick a name for the group and be prepared to sing one song. This is a good chance to get your feet wet if you haven't done much quartet singing.

This year's dinner meeting will be held on Saturday, December 13th at Anthe's on the Lake, 4315 Manchester Road. There will be a cash bar at 6 and dinner will be at 7. Members are free and guests are $20. Menu choices with sign-up sheets will be available at rehearsals on November 4th, 11th and 18th. The deadline is December 5th. 2009 officers will be installed at this meeting and the BOTY will be awarded.(fill out your nominee form ASAP)

If you have filled out your bio form, bring it to the next rehearsal. An envelope will be provided for collection. There will also be blank copies of the form available. You can take one home and fill it out at your leisure.

Since there were no chapter members celebrating birthdays between October 27th and November 10th (next bulletin), let's honor a famous American who was born on October 27th, 1858. That would be Theodore Roosevelt, the 26th President of the United States, who served from 1901 to 1909. When Roosevelt ran for re-election in 1904, his main campaign song was "A Hot Time in the Old Town Tonight".

Here are Stan and Ollie doing an old favorite. Our "frontline" guys would look great doing this choreography. How about a "Foreign Legion" number in some future show?

If you still want more Halloween songs, here are the Dapper Dans at Disneyland doing a Halloween set.

If you haven't been to a chorus rehearsal lately, you are invited to join us soon. Look at how much fun we had at the last rehearsal. Click on the picture below.

by bulletin reporter, Bob R. Shoppe. Comments made by Mr. Shoppe are not necessarily those of the chapter or any other human beings on the planet.

If the Santa Maria had been equipped with a GPS, the banks in India would be closed today and the Knights of Columbus would be an organization for Hindu men.

You can see the results of our recent "clothing" poll above. Thanks to all who voted. The one "other" vote was for "duds".

Golf Outing. Enjoying the 9 hole, best ball scramble were: Luke Frohnapfel, Ray Stone, Jim Heaton, Bud Couts, Jim Bishop, Rip Wilson, Dan Nichols, Jim Mally, Vic Estafen, Buzz Fraley, and Jim Regallis. After the golf, there was food, beverages and (surprise) singing. Luke's son joined in with everyone on " My Wild Irish Rose". There is talk of more golfing in the future, so stayed tuned.
Getting To Know Us

In the next couple of days, watch your email for a request for some background information about yourself. The information is for a feature in upcoming bulletin issues. If you haven't received this email by noon on Wednesday, Oct. 15th, contact the bulletin at derbytown08@gmail.com
Officers For 2009

The election of officers was held during the business meeting at our September 23rd rehearsal. Congratulations to all. The 2009 officers are:

The new officers will be installed at our annual December Business Meeting.

Pictured below are Casey and Brian Stack, who were guests at a recent rehearsal. It's always good to see father and son singing together. 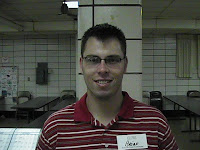 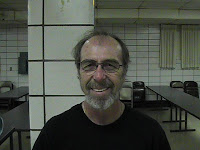 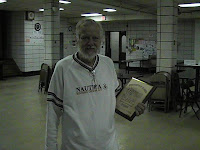 Congratulations to Dan Nichols for being chosen as Barbershopper of the Month for September. Dan may not be as big a part of the chapter in a physical sense anymore, but he certainly is when it comes to the giving of time and effort for chapter events.

Have You Heard This Song?

Here is a clip from a 1942 movie, featuring Charles "Buddy" Rogers, Marilyn Maxwell and everybody's favorites, Biff Morgan and his Cats. Those "Cats" could use some coaching from Kirk on the subject of facial expression.

"The old songs, the old songs, those good old songs for me.....". The Old Songs was composed by Geoffrey O'Hara who was born in Ontario in 1882. O'Hara was a banker and a professional musician. He received an honorary doctorate of music from Huron College.

O'Hara composed songs for Al Jolson and Enrico Caruso. Two of his better known popular compositions are "K-K-K-Katy" and " Your Eyes Told Me So". He also composed many spirituals, including "There Is No Death" and "I Walked Today Where Jesus Is". It isn't known whether he wrote barbershop songs although he was the founder and first president of the Manhattan chapter.

"The Old Songs" is really the introduction to a more complete work of 14 pages, "A Little Close Harmony". It is a glee club type song with banjo and other instrumental background.

In the early days of our Society, Mr. O'Hara gave permission for us to use the introduction as our theme song.

If you want to hear this song, watch the following video. You might recognize some other songs too.

Watch for the next bulletin on Monday, October 27.