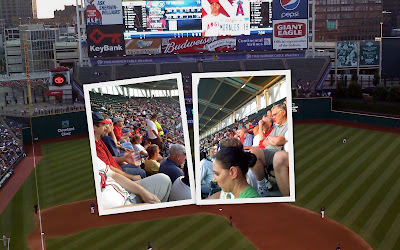 Recently, the chapter was awarded 50 free tickets to the August 18th baseball game between the Indians and the Angels. Non-profit groups, such as ours, are chosen for this giveaway and our number came up. After reports threatening rain, the evening's weather turned out to be almost perfect. Those chorus members, wives and friends who were able to attend had a good time. Of course, this was not as exciting as the game earlier this summer when we sang The National Anthem. And even though the Tribe played hard, this time there were no ninth inning heroics and the home team lost, 5-4.

The subsidiary P.R.O.B.E., (Public Relations Officers and Bulletin Editors) of the Barbershop Harmony has announced the 2009 International Bulletin Contest Winners. This contest is open to bulletins from all Chapters and Districts in the BHS. Bulletins are judged using four criteria: Design, Graphics, Grammar, and Style. In the past, awards were issued in two categories, online bulletins and print bulletins. This year, a third category, electronic bulletins, was added. This is the category in which our own Derbytown Chorus Bulletin competed.

The top three electronic bulletins were:


Bulletin; Chapter; District; Score
The SCORE; Fort Wayne, IN; CAR; 1563.4
In-Cider; Manhatten, KS; CSD; 1546
Upbeat; Hemet, CA ; FWD; 1365.75
And in 7th place;
The Derbytown Chorus Bulletin ; Akron. OH ; JAD; 1088.9
Participation in this contest provides a chance to see what other bulletin editors are doing, and also get feedback from the judges about what we are doing well and how we can improve.

The mystery chorus member whose bio appeared in the 8/10 bulletin was none other than our Chapter Secretary and Assistant Director, Dan Nichols

Chinese Seventh-a dominant seventh chord voiced with the fifth in the bass and the root and the seventh in the top two voices, the higher note being the root

Alternate Chinese Seventh-a chord that is tainted with lead. Note: How you pronounce the last word of the previous sentence changes the definition.

Easybeat-a word used to group songs sung to a strict tempo, in a relaxed style.

Falsetto-the thin, upper range of the voice where only the extreme outer edges of the vocal folds vibrate.

Tonic Chord-a major triad built on the key (or root) note of any given scale. In the key of C major, the tonic chord is C-E-G.

Vowel-a speech sound uttered with voice or whisper characterized by the resonance from the vocal cavities.

Public Relations and Marketing VP-interpret the Chapter's goals in order to bring this message to the general public. Should be involved in the annual show, package shows, community activities, welcome extended to guests, the chapter's reputation in the community and relations with other chapters.

Board Member At Large- is responsible for reflecting the membership's needs and desires to the Board.

Delegate-serves as the Chapter's representative in the District House of Delegates. Provides a two way communication link between the Chapter and the District.

In the past three bulletin issues, all 11 Chapter Officer descriptions have been outlined. Look them over and give serious consideration to stepping up to be an officer for 2010. The nominating committee is putting together a slate of officers and looking at a tentative date of Tuesday, September 15 to take any nominations from the floor. This would be done during our regular business meeting. The final slate of officers will then be presented to the membership for voting at the next business meeting on Tuesday, September 22. The new officers will be installed at our annual December business meeting/holiday dinner.
Birthdays

I Love You Truly/ A Perfect Day
Carrie Jacobs was born in Janesville, Wisconsin, in 1862 and experienced a number of misfortunes in her early life. Her father died when she was twelve.

Her husband, Dr. Frank Bond, died prematurely. A serious fall in 1895 left her an invalid with a youn 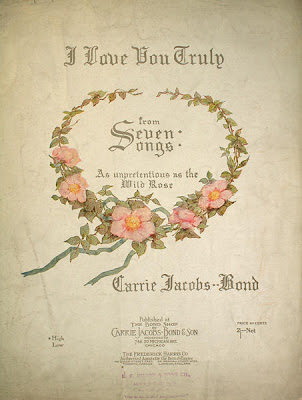 g son. After a career attempt as an artist, she turned to songwriting to survive. Popular music publishers turned down her "art" songs, but she had early success with children's songs. To succeed as a songwriter she started her own publishing business, in a bedroom, financed by a song recital. Her first book, "Seven Songs," contained "I Love You Truly," a standard at weddings for many years, which survives today as a Valentine's Day ballad. Her most popular song was a huge hit in 1909, "A Perfect Day," selling five million copies. Carrie Jacobs-Bond received many awards and is recognized as an outstanding American woman composer. She retired to Hollywood and was interred at Fairlawn Court of Honor in 1946, following notables like the sculptor of Mt. Rushmore.

, August 20, the chorus provided entertainment for "Italian Night" at Summerville at Camelot Place in Medina. Under the direction of Scott Giles and Dan Nichols, we performed many of our standard repertoire songs, with some minor changes. Who can forget "Goodbye My Sweet Italian Baby"? We joined with our audience to sing some real Italian songs,( "Arrivederci Roma", "That's Amore" and "Mona Lisa" ) with piano accompaniment provided by Jerry Mason. After we sang, our hosts provided us with Spumoni ice cream as an appropriate ending for the evening.

There is no regular chorus rehearsal at Holy Trinity on this night. 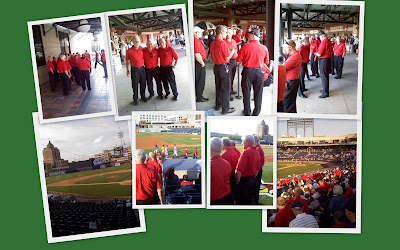 On Tuesday, July 28, the Akron Derbytown Chorus sang The National Anthem at the baseball game between the hometown Akron Aeros and the Erie Seawolves. This has become an annual event and as usual, a great time was had by all. After a brief warmup, we were escorted onto the field. The opening ceremonies included the traditional first pitch delivered by our President, Wil (Wild Thing) Veith and also Assistant Director, Bud (Speedball) Couts. Then it was time to sing. It is difficult not to feel a few goosebumps as you stand together with your fellow barbershoppers and sing our nation's song.

As we left the field, the Seawolves' third base coach told us that it was the best rendition that he had heard. He may not have ever judged at an international convention, but he has certainly heard a lot of versions of The Star Spangled Banner.

We then settled into section 114 with family and friends to watch the game and lead the crowd in singing "Take Me Out To The Ballgame" during the seventh inning stretch. The weather was perfect, hotdogs were $1.00, and the Aeros won the game by a score of 7-4.

The video below shows our pregame performance. One editor's note: To Erie hitting instructor, Lee May, Jr., number 30. If you expect to rate with the Akron Derbytown Chorus, don't expectorate while we're singing.

Echo-an arranger's device used to enhance a song musically and lyrically. Usually, the leads hold onto a word while the harmony parts change notes and repeat words from the end of the phrase.

Legato-smooth singing with no apparent interruption in articulation.

Pick-Up-when an arranger starts a phrase on the upbeat with one voice part only, usually lead or bass, joined by other parts on the downbeat of the next measure.

Tonal Center-Giving preference to one tone, so that the tonic becomes the center to which all other tones are related. The tonal center should remain constant, barring a key change, until the song's conclusion.

This barbershopper was born in Akron and has lived in this city for all his life with the exception of a 19 month period during 1963-65. He has been a barbershopper and chapter member for 22 years. He has three children, 13 grandchildren and one great-grandchild.

He played clarinet from fifth grade into college. His first voice class and directing course came around age 13 and soon after, he founded and directed the Youth Choir at Norton Grace Brethren Church. In this role, he competed and placed second in a national competition.

After graduating from Kenmore High School in 1963, he moved on to Grace College in Winona Lake, Indiana. He sang in the Oratorio Society in college. One of the major tasks of this group was to sing Handel's Messiah before Christmas break. His classes included math, music education, English and Speech. He also was an actor and tech director for two plays while in college.

According to his bio, his parents moved while he was away at college. He finally pried the address out of them and moved home in January, 1965.

He worked at Goodyear Tire and Rubber Co. for 37 years, a large portion of which was spent servicing all the scales at the Tech Center. This included everything from lab scales to truck scales. Other job experiences were in janitorial service during college, maintenance for his parents' dry cleaners and as a saw man in a machine shop.

The Songs We Sing
"Hello Mary Lou" is a song written by U.S. singer Gene Pitney and Cayet Mangiaracina and performed by Ricky Nelson in 1961. It reached #9 on the Billboard music charts on May 28, 1961, although the other side of the single, "Travelin' Man", hit #1. In the United Kingdom, where it was the unrivalled A-side, it hit #2, and it was a hit in much of Europe, particularly Norway, where it spent 14 weeks at #1. The song features an influential guitar solo by James Burton, often cited by modern guitarists such as Brian May.

(All together now, "More Cowbell")

Chapter Officer Duty Descriptions
With chapter elections coming up in a few weeks, here is a continuation of the article that was introduced in the July 27th bulletin.

Music and Performance VP-responsible to the Chapter for developing the Chapter's music leadership and maintaining an acceptable standard of capability in the Chapter's performing units. He should provide periodic articles for inclusion in the Chapter bulletin. His primary interface is the musical director.

Chorus Manager-responsibilities cover nearly every physical aspect of the chorus rehearsal and performance. He assures that materials and equipment are in the right place at the right time. He supplies the music team with any materials that they require. He must interface well with all members of the Chapter and also with individuals and groups outside the Chapter. In short, he should have good PR and communication skills and be able to delegate to others within the Chapter.

Program VP-the music team and director are in charge of ensuring a quality musical presentation at every Chapter meeting, the Program VP is in charge of everything else. He is responsible for making the meeting congenial and fraternal. He focuses on logistics that will make for a well-organized meeting that runs smoothly and is fun. 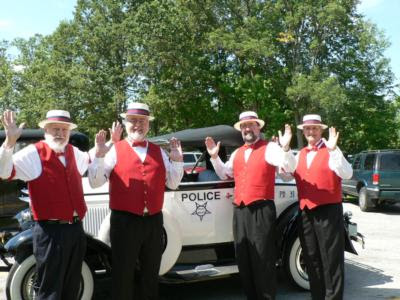 Clear Choice was busy last Saturday (7/8). Dan, Ray, Jim and Bill delivered a Happy Birthday/Singing Telegram (sort of, ask one of them for details) early Saturday afternoon and then motored to downtown Kent for a 30 minute show as part of an ice cream social. It was rainy, but they sang songs about sunshine and stayed dry, for the most part. Ice cream was 25 cents/scoop and age 60 and over ate free. Who cares about rain?

You noticed that some parts of today's bulletin contained red text color as usual and other parts had black text. Take a minute, scroll back to the top of the bulletin and complete the Text Preference poll in the top right corner. You can listen to the Music City Chorus below before you do the poll. It's up to you, but please respond.

How About Some More Singin'?
(These guys came in 18th)