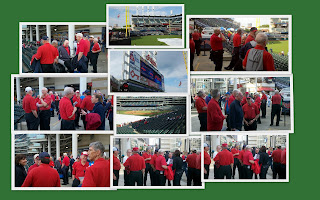 (remember, click on any Bulletin picture to enlarge it)

On June 2, we journeyed to Progressive Field in Cleveland to sing the National Anthem before the Indians-Twins game.  The pregame music around the ballpark made it a little difficult to do our usual impromptu concert.  Also, the band playing by the Bob Feller statue prevented our friends and families in section 303 from hearing our on-field singing.  To their credit, the Indians organization sent a nice apology letter regarding this last problem.  The Tribe lost the game, but the post-game fireworks were excellent.  Thanks to all chorus members who participated and for those who cheered us on from the stands. 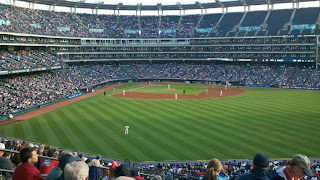 Spreading The Word About Barbershop

The Akron Chapter made a monetary contribution to the Cuyahoga Falls High School Choral Music Association (CMA) at the school on May 18. Choral Director Jesse Lange and his Choral Elite Ensemble hosted annual show director Mike Sitter, who presented Mr. Lange with a check for $200.

The Elite Ensemble had performed a choral set on the chapter’s 65th annual show, How the West Was Sung, at the high school in March. Lange said the CMA would use the donation to purchase new sheet music for his singers.


“Including the Ensemble on our show begins a revival of our chapter’s Youth in Harmony program,” said Sitter, who recently agreed to coordinate the program. 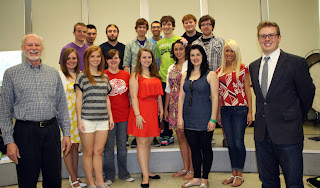 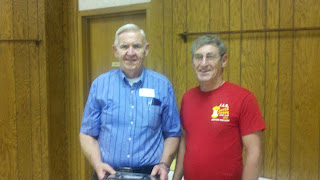 Though Lou Elliott has been with the chorus for a while, at a recent rehearsal, he received his framed membership certificate.  Congratulations, Lou.  It's great to have you singing with us. 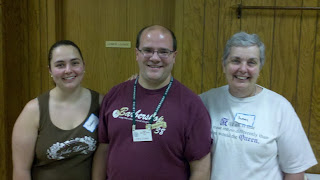 Chorus member, Chris Eitman, was accompanied to a recent rehearsal by his wife, Sabra and his mother-in-law, Susan Bonnett.

The Akron Chapter’s mission statement says, in part, “We support vocal music education.” Our Youth in Harmony program is the primary vehicle for addressing this task.

New YIH chairman Mike Sitter began the revitalization of the program by including the Cuyahoga Falls High School Choral Elite Ensemble on our 2012 annual show.

“The next step in the process,” Mike said, “is to visit local area high schools and introduce choral students to the barbershop style.” Mike and his YIH team of Scott Giles, Jim Heaton and Tom Gentry began making school visits last month.

On May 21, they visited Akron’s North High School and addressed Richard Eder’s 9th – 12th grade choir. “We were very well received by approximately 30 girls and boys, several of whom speak English as a second language,” said Sitter.

Then, on May 24, the team traveled to Akron’s Kenmore High School, where they visited Barbara Bellamy’s select choir. “About 50 girls and boys responded tremendously,” Sitter noted, “and several students expressed a keen interest in attending Harmony Camp in August.”


For The Good Of The Order
Vocal Spectrum

Watch for details at rehearsals and in the High Notes.
Posted by Derbytown Chorus Bulletin